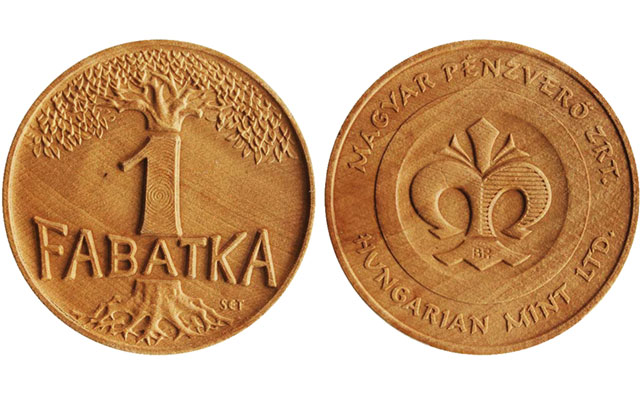 The Hungarian Mint used its coinage press to strike several hundred examples of a wooden medal. 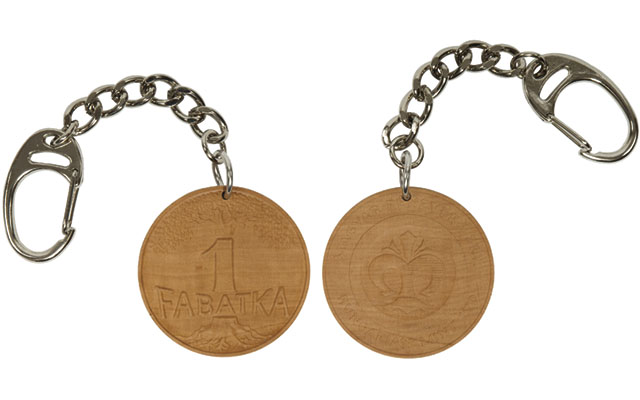 The wooden medal is also available with a key chain attached so it may be used as a small token gift.

Whether coins or medals, almost every modern mint's production is exclusively metallic.

Except in Hungary, that is.

Horvath explained the medals and process to Coin World during the World Money Fair 2015 in Berlin.

“We struck them on the same minting presses, where the ‘normal’ precious metal collector coins and medals are struck,” she said.

The medals are struck in wild pear wood on an unspecified Gräbener press using 200 tons of force, striking them at least two times.

The obverse, designed by Tamás E. Soltra, depicts a tree, the trunk of which forms a 1 “Fabatka” symbolic denomination.

The 1 Fabatka symbolic denomination is a reference to ancient small change used in the 16th century in Silezia and called “batka."

The reverse shows the logo of the Hungarian Mint.

“Several hundred” of each type were made, with the intention that they be used as small gifts.

Each measures 42.5 millimeters in diameter.

The medal version is offered for €1.49, while the version holed and affixed to a key chain retails for €2.49.

To learn more, visit the website of the Hungarian Mint.

Distributor Coin & Currency Institute will offer the medals and keychains to North American buyers, for $9.95 and $12.50, respectively. To order, visit its website, www.coin-currency.com.