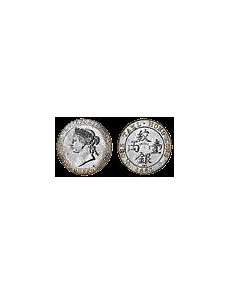 A pair of pattern coins for Hong Kong formerly from the famed collection of Irving Goodman led all bidding in a small auction Jan. 14 by Spink in Hong Kong.

Leading the 53-lot auction was a Proof 1867 silver tael pattern of Queen Victoria. The coin features four Chinese character on its reverse for “1 liang wen yen” (meaning “1 tael pure silver”), with TRIAL in small letters in the center.

The coin is cataloged as Krause-Mishler Pn119 in the Standard Catalog of World Coins, 1801-1900, by Chester Krause and Clifford Mishler.

The coin realized £151,020 ($231,509 in U.S. funds), including the 20 percent buyer’s fee. When sold in the May 28 and 29, 1995, auction of the Goodman Collection, the coin realized $120,750, including a 15 percent buyer’s fee. (In the January Spink auction, the coin was graded Extremely Fine with “some very minor hairlines” and a few small metal flaws, while in the 1995 Goodman auction it was described as being in Brilliant Proof and “the highlight of this collection.”)

The other marquee lot sold in the Jan. 14 Spink auction was a Proof 1864 silver pattern denominated one dollar and 20 cents.

The coin, which also features Queen Victoria on the obverse, shows on the reverse three crowned shields, of England, Ireland and Scotland (a rose, shamrock and thistle, respectively), radiating from the center around a small George of the Badge of the Garter.

The complete catalog may be viewed or downloaded as a PDF from a link at the firm’s website, www.spink.com/auctions/pdf/12008.pdf.