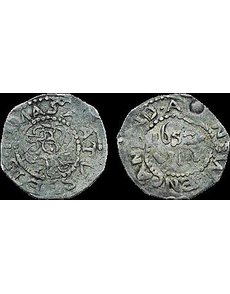 The only 1652 Willow Tree threepence in private hands would make for an expensive addition to your Christmas pudding. It sold for $632,500 in 2005.

If you’re celebrating Christmas in a traditional Colonial-era way, your feast may well include a Christmas pudding. Part of an English Christmas since the 17th century, the sugary dessert appeared on sideboards throughout the British colonies in America, a tradition that persists in many parts of New England even today.

Like so many aspects of the holidays, the creation and presentation of a Christmas pudding is rich with tradition, including the custom of stirring a small silver coin into the mix, to be found by one lucky guest to the Christmas table.

The odds of getting the coin on your plate required a good bit of luck, which was thought to translate into financial success in the upcoming year.

Typically, a threepence was the coin selected for inclusion in a Christmas pudding. For those of you who would like to pursue an authentically Colonial-era Christmas, you have a few options for what American threepences you could select.

The obvious choice is a 1652 Massachusetts threepence. Included in the original 1652 authorizing legislation, the denomination was produced alongside sixpences and shillings from the earliest New England coinage through the Pine Tree era. Finding an NE threepence to throw in your dessert would require breaking into the Massachusetts Historical Society, which wouldn’t be very much in keeping with the holiday spirit, but that’s where the only known example resides today. Willow Tree threepences aren’t much more common. The only example in private hands sold for $632,500 in 2005.

Oak Tree and Pine Tree threepences are a bit more common, easily acquirable today despite being far scarcer than their shilling and sixpence brethren. These diminutive pieces are not very popular with collectors today, perhaps because of their size, so most of them cost about the same as the much more numerous shillings in the same grade.

If you’re celebrating a Colonial-style holiday outside of New England, you might consider one of the two types of threepences produced for circulation in 18th century Maryland, products of the workshops of John Chalmers of Annapolis or Standish Barry of Baltimore and coined in 1783 and 1790, respectively. Both threepence coins are very rare today, leaving even holed pieces costing well into the thousands of dollars.

We do not recommend cooking with a Higley threepence, coined in Simsbury, Conn., in 1737. Copper toxicity can lead to everything from vomiting to a coma.