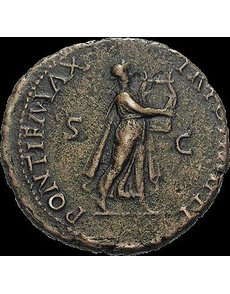 Nero shares his artistic side on the reverse of this copper as of A.D. 65, depicting himself as the god Apollo playing a lyre. Image courtesy of www.cngcoins.com. 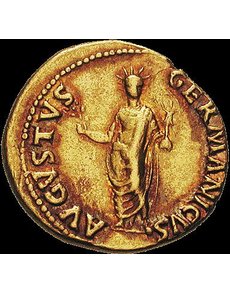 The reverse of this denarius of Nero shows a monumental statue, the Colossus Neronis, which portrays Nero as the sun-god Sol.Image courtesy of www.cngcoins.com. 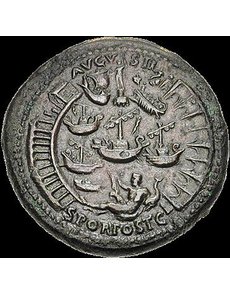 The port of Ostia is elegantly depicted on the reverse of this brass sestertius of A.D. 64.Image courtesy of www.cngcoins.com. 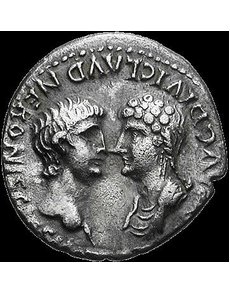 The portraits of Nero and his domineering mother, Agrippina, are shown face to face on the obverse of this denarius struck near the end of A.D. 54.Image courtesy of www.cngcoins.com. 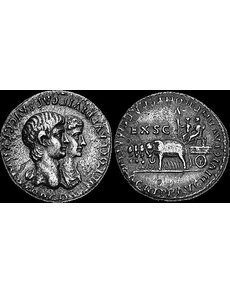 On this silver denarius of A.D. 55 the busts of Nero and Agrippina are jugate. The reverse of the coin shows statues of the deified emperors Augustus and Claudius on a cart being drawn by several elephants.Images courtesy of www.cngcoins.com. 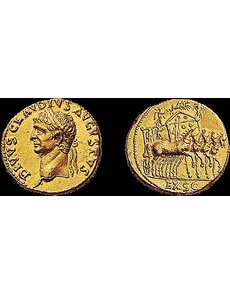 The deified Claudius is portrayed on this aureus struck by Nero in the closing months of A.D. 54. The reverse shows a tensa that carries a representation of Claudius the god.Images courtesy of www.nomosag.com.

Few Romans are more famous than Nero (A.D. 54 to 68), the last of the Julio-Claudian emperors.

His reign was rife with misdeeds, and his reputation has found few defenders with the passage of time. In his defense, though, he was a prolific issuer of beautiful and historical coins.

Many of Nero’s Imperial coins have “better” reverse types that appeal to almost anyone who likes Roman history. To examine all of them would be an undertaking beyond the scope of a single column, so we’ll restrict ourselves to six of the most remarkable.

Nero was the only child of Agrippina the Younger, whose brother Caligula had been emperor from A.D. 37 to 41. She was also a great-granddaughter of Rome’s first emperor, Augustus (27 B.C. to A.D. 14), and her father, Germanicus, was destined to become emperor until he died mysteriously during the reign of Tiberius.

With such an illustrious family line, Agrippina and Nero were well placed in the ruling family. In A.D. 49 Agrippina climbed further up the ladder by marrying her uncle Claudius, a man 25 years her senior who at that time had been emperor for the previous eight years. Soon after the wedding, Claudius adopted her son, who assumed the name Nero.

During the four years that remained in Claudius’ life, Nero became his favored heir, even over his natural son, Britannicus. Claudius did not hide his favoritism, for he issued coins portraying Agrippina and young Nero.

When Claudius died in October of A.D. 54 — reportedly of a murder arranged by Agrippina — Nero became Rome’s next emperor.

Some of Nero’s earliest gold aurei and silver denarii, struck from October through December of 54, honor his adoptive father. They show on their obverse the portrait of Claudius, whose recent deification is noted in the accompanying inscription.

The reverse of that issue also honors Claudius by showing a horse-drawn tensa, a cart used to carry a representation of a god to celebratory games. The tensa bears figures of Victory and a chariot, and its panels are decorated with figures of Victory and seemingly also of Claudius, who now ranked among the gods.

Also from this early period are some remarkable aurei and denarii showing both mother and son, for at this time Agrippina was regent for her son on account of his youth. On the first issue their busts are confronted, and though Nero occupies the most honorable position, the inscription is dedicated to Agrippina, suggesting these coins were issued on her behalf. Nero’s inscription is relegated to the reverse.

The confronted-bust issue was short-lived, perhaps because it so boldly implied Agrippina’s supremacy. It was replaced with a type struck throughout most of A.D. 55, which also bears both of their portraits, but this time they are shown jugate (side by side), with Nero’s bust still in the more honorable position. There was, however, an important shift in the inscriptions.

This time, Agrippina’s inscription was moved to the reverse and Nero’s moved to the obverse. The reverse type is also of some interest, for it celebrates Nero’s and his mother’s nobility by showing an elephant-drawn cart bearing statues of Augustus and Claudius, the only two emperors to have been deified at that time.

We now leave the early months of Nero’s reign and move to A.D. 64, long after he had murdered his mother to end her meddling in his affairs.

The construction of new facilities at Ostia, the port at which most goods flowed into Rome, was completed in 64. Engineers and laborers had struggled since the reign of Claudius to enlarge the harbor, and it finally was ready to be dedicated.

Nero did not fail to make the most of this event, including minting brass sestertii that featured an elaborate, bird’s eye view of the harbor. In addition to ships, the harbor contains a column (or lighthouse) topped with a statue of Nero or the sea-god Neptune, and a reclining figure that may represent Neptune or the Tiber, the river that linked Ostia to Rome.

Unfortunately, in mid-July of A.D. 64 a great fire swept through the capital, razing to the ground three of the city’s 14 districts and damaging seven others. Some blamed Christians for the conflagration. Others believed Nero started it, either out of madness or in a desire to clear land for a new palace he wanted to build.

The cost of rebuilding Rome may have been the motivating factor for Nero’s coinage reform of circa A.D. 64 in which the weight of his gold aurei and silver denarii were reduced.

Additionally, Nero collected great amounts of silver from the provinces by withdrawing billon coins and replacing them with new, lower-purity coins. The amount Nero raised is staggering, for he may have garnered more than 3,500 tons of silver from Egypt alone.

Two coin types are commonly associated with the fire — one with the fire itself and the other with a consequence. Copper and orichalcum asses show a striding figure of Nero, in the guise of Apollo, playing a lyre. The accounts of Dio Cassius, Suetonius and Tacitus all record it was rumored at the time that Nero played his lyre as he watched Rome burn — hence the connection often made to these bronzes. However, they were first struck in about A.D. 62, and thus were introduced two years before the fire.

The other type occurs on aurei and denarii. It shows a representation of the Colossus Neronis, a towering bronze statue of Nero portrayed in the guise of the sun-god Sol. It was a major work of art that graced the vestibule of the “Golden House” palace that Nero constructed on a prime piece of land that had been liberated by the fire. After Nero’s death the statue eventually was moved near the Colosseum, the famous amphitheater that derives its name from Nero’s displaced monument. ¦