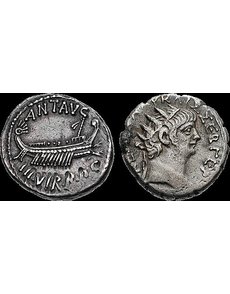 “Legionary” denarii were struck by Marc Antony in preparation for the Battle of Actium; an obverse of one of these denarii is shown at left. About three decades later, Nero helped pay for damage from the great fire of A.D. 64 by reissuing billon tetradrachms in Egypt; an example of one of Nero’s billon coins is depicted at the upper right. 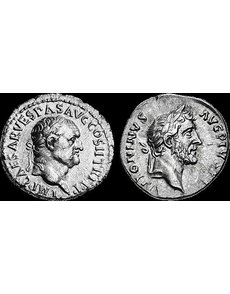 A pair of silver denarii portray Vespasian, left, who in A.D. 69 brought an end to civil war, and Antoninus Pius, right, who reigned over an age of peace and prosperity. 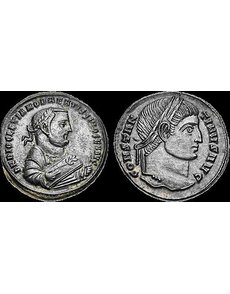 The abdication of Diocletian in A.D. 305 is marked by this billon nummus, left. Rome’s first Christian emperor, Constantine I, is portrayed on this reduced-size nummus, below.

The Romans created thousands of historical coin types from the late fourth century B.C. to the late fifth century A.D. Picking the “best” of these is a matter of personal preference, and what follows are eight important and historic topics for which coins can be acquired on a modest budget.

During the first century B.C. the Roman republic was in decline as warlords battled for supreme power. By 36 B.C. it came down to just two men, Marc Antony and Octavian, both of whom had ties to the slain dictator Julius Caesar. Finally, they drew up battle lines at Actium, a port city on the west coast of Greece. When their armies clashed early in September 31 B.C., Octavian defeated Antony to become the undisputed master of the Roman world.

Many coins were struck in preparation for the battle, and others afterward in commemoration. Perhaps the best representative coins are silver “legionary” denarii issued by Marc Antony from 32 to 31 B.C., which show a war galley and military standards, and usually name a Roman legion.

One of the most devastating fires in the capital city of Rome occurred in A.D. 64, during the reign of the Emperor Nero (54 to 68). Some blamed it on Christians, but others suspected agents of Nero had set the fire since the emperor wanted to clear valuable, occupied land in the center of Rome to make room for his “Golden House” and gardens.

To pay for it, Nero looked to the provinces. He recalled from circulation millions of debased-silver tetradrachms in Egypt, melted them and replaced them with coins of much lower value. The profits were enormous, and Egyptian tetradrachms from late in Nero’s reign are among the most plentiful objects representing the means by which Rome was rebuilt.

This Roman civil war brought an end to the reign of Nero (and, thus, the Julio-Claudian dynasty) and allowed four new men — Galba, Otho, Vitellius and Vespasian — to be hailed emperor in quick succession. The war is especially rich in numismatic history, allowing many specialized collections to be assembled.

Most coins from the war are relatively expensive, but opportunities still exist for collectors on a budget. Worn silver denarii or bronze asses of all four emperors can be acquired for a reasonable price, as can similar coins of Nero.

During the reigns of the emperors Hadrian (A.D. 117 to 138) and Antoninus Pius (138 to 161), the empire enjoyed security and prosperity that would never be duplicated. That era ended during the reign of Marcus Aurelius (161 to 180), who witnessed the beginning of Rome’s decline: an outbreak of plague, persistent border wars and the assumption of power by his depraved son Commodus (177 to 192).

The coins of the era are plentiful and affordable in both bronze and silver. You might also add a coin of Trajan (98 to 117), whose expansionist reign paved the way, and one of Commodus, whose reign capped the age and gave rise to civil war.

In A.D. 248, Rome celebrated its thousandth year based upon the long-held belief that Rome was founded in 753 B.C. (We now have an archaeological record that suggests Rome was settled by about 1000 B.C.) The festivities occurred under Philip I (244 to 249), at a time when there was little else to celebrate. Romans were always fond of entertainment, and Philip’s games must have done much to raise spirits.

Many coins that he struck for the event show exotic animals featured in the games, including lions, stags, antelopes, European elk and hippopotamuses. Others show an inscribed column, the goddess Roma or her temple, an elephant with rider, or the she-wolf suckling the twins Romulus and Remus.

As bad as the reign of Philip I had been, conditions worsened over the next two decades until the empire was in a ruinous state. During this era, most of Western Europe, Asia and Egypt broke away in revolt. However, just as Rome seemed to be on the brink of collapse, an energetic general named Aurelian was hailed emperor in A.D. 270.

By 274, he had traveled the length the empire twice, restoring much of its former glory. Aware of the scale of his achievement, Aurelian declared himself “god and lord” (deus et dominus) and “restorer of the world” (restitvtor orbis). Equal praise is due one of his successors, Probus (276 to 282). Fortunately, the billon coins of both emperors are plentiful and affordable.

On May 1, 305, an unprecedented event occurred: a Roman emperor voluntarily retired. He was Diocletian, perhaps the most dedicated reformer of the Roman Empire since Augustus himself. When he ascended the throne in 284 he willingly shared power with a comrade, Maximian, whom he also compelled to abdicate. Power then passed to their hand-picked successors, Galerius and Constantius I.

Commemoratives for the abdications of Diocletian and Maximian were first struck in 305. These issues — usually base metal coins with a trace of silver — show on their obverses the bust of Diocletian or Maximian adorned with the robes of a consul, and on their reverses the figures of Providentia (foresight) and Quies (retirement).

The rise of Christianity

Up until the reign of Constantine I “the Great” (A.D. 307 to 337), Rome had been a pagan state. However, by 312, Constantine began to support Christians, who were then being persecuted. By the end of his reign Christianity was the favored state religion. It still took decades for the Roman Empire to become a majority Christian state, a struggle that to some degree is documented by coinage.

Though Constantine was anything but a model Christian, his adoption of Christianity helped to preserve Western Civilization, making it one of the seminal events of world history. Fortunately, small bronze coins with the portrait of Constantine I are common, and superb examples can be acquired easily and at a reasonable price. ¦