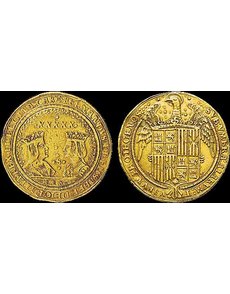 A rare gold solidus of usurper Priscus Attalus, struck circa A.D. 409 to 410, is one of 12 known examples from the short-lived reign. The coin is among nearly 38,000 coins being offered in one lot by Sotheby’s in a sale closing March 8.

A ready-made collection of 37,895 coins related to the history of Spain is being offered by the Hispanic Society of America in a single-lot sealed-bid auction ending March 8.

The sale, to be conducted by Sotheby’s, occurs nearly four years after the American Numismatic Society was forced to relinquish the collection, which was formed by the benefactor of both organizations, Archer M. Huntington.

The lot has an estimate of between $25 million and $35 million.

The collection is considered unrivalled in some areas and includes coins dating to circa 225 B.C., coins from the Roman Empire, coins from the Visigothic and Umayyad periods, and coins from more modern periods.

The collection encompasses several areas, with some areas and eras represented by thousands of coins. Much of the collection’s value lies in its unplumbed breadth and depth and in the potential knowledge it holds, yet to be discovered, according to several experts.

David Redden, vice chairman of Sotheby’s and head of the special projects department, said in a press release that “there are still discoveries yet to be made by the purchaser.”

The ANS will not be bidding on the collection, according to Wartenberg Kagan. “Anyone who is vaguely familiar with the finances of the ANS knows this is not even an issue,” she said. “Even if we could raise that much [money], I’m not sure the board would want to spend it that way.”

The organization has faced financial challenges the past decade or so, as it has moved twice, first from its location next to the Hispanic Society of America at Audubon Terrace, to a new location in lower Manhattan, before leaving that location, selling the building and finding a home at its current 75 Varick St. location.

It was the second move that triggered a rift between the two non-profits, because the move voided a 2007 revised loan agreement stating that none of the objects could be reloaned or transferred to any other entity or location without the prior written approval of the Hispanic Society of America.

After learning the ANS was relocating and did not seek permission to move the collection, the trustees of the Hispanic Society adopted a resolution to not renew the 2007 agreement. The ANS fought the action but a New York judge sided with the Hispanic Society of America.

Huntington donated his entire collection of coins and medals to the trustees of the Hispanic Society with a portion deposited on loan with ANS for publication. Huntington, the son of transportation magnate Collis P. Huntington, founded the Hispanic Society of America; Mariner’s Museum in Newport News, Va.; and Brookgreen Gardens in Murrells Inlet, S.C. He joined ANS in 1899 and donated land for the first headquarters built, as well as finances and land for a major addition.

In 1946, the Hispanic Society first loaned coins to the ANS with a condition to hire the scholar Dr. George C. Miles for the purpose of studying the collection. Funds were also provided to ANS to cover 10 years of Miles’ salary.

Huntington’s collection was called “one of the finest and most comprehensive collections of Spanish coins that has ever been brought together,” according to author Miles in The Coinage of the Umayyads of Spain, which was one of three books by Miles based on the collection. “No phase of the numismatic history of Spain and related countries has been neglected.”

One of the highlights is the unique circa 1500 gold 50-excelente coin issued under Ferdinand and Isabella. Another is the circa A.D. 409 to 410 gold solidus of Roman usurper Priscus Attalus, one of 12 known examples remaining as a testament to his brief would-be reign.

Though publicity for the sale focuses on the highlights, Sotheby’s has prepared a catalog providing details about the collection (though one was not made available to Coin World before press time Dec. 20).

Mitchell A. Codding, executive director of the Hispanic Society of America, said in a press release, “While we are placing no restrictions or requirements on the buyer, we value Archer Huntington’s achievement so highly that we have instructed Sotheby’s to sell this collection as a single lot.”

The Hispanic Society of America is employing the sealed-bid format after failing to interest unnamed institutions in Spain, Europe and the United States.

An institution is the best home for the collection, Wartenberg Kagan said.

“We very much hope an institution or the Spanish government might be a buyer,” she said, adding that a buyer in Spain is more likely than in the United States.

A spokesperson for Sotheby’s had not answered whether the $25 million figure was a floor, or minimum bid, and whether the sale has a reserve price.

Proceeds from the sale are anticipated for use for future acquisitions and collection care, according to the Hispanic Society, which itself has faced financial woes and dwindling interest in recent years, so much so that it has pondered leaving its Audubon Terrace location for someplace lower in Manhattan.

A sale price of $25 million would nearly double the foundation’s net assets, which were listed as $25.9 million, according to the latest IRS document, for the year ending Sept. 30, 2009.

Highlights will be on display at Sotheby’s York Avenue galleries from Jan. 3 to 6 and Jan. 9 (during the 40th annual New York International Numismatic Convention), with the collection to be exhibited in its entirety during February.