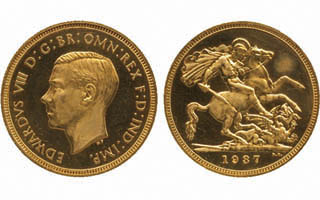 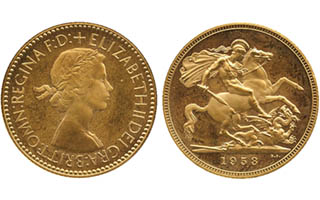 After the 1953 coronation of Queen Elizabeth II, Proof gold sovereigns were issued in limited numbers, and an example hasn’t been available to the market individually since 1985. The Hemisphere Collection example is another highlight of the A.H. Baldwin & Sons auction. 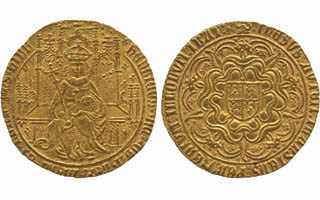 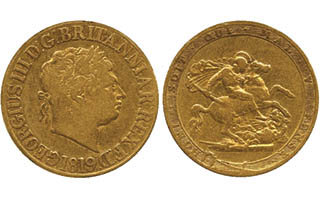 A large collection of gold sovereigns is entering the marketplace through A.H. Baldwin & Sons Ltd.

Other highlights include one of the earliest examples of the sovereign, from some 500 years ago, and an example of its pivotal design change nearly 200 years ago.

The Hemisphere Collection was formed over 10 years, beginning in 2003. The consignor’s fascination with the history of the sovereign has culminated in the only private collection known to the auction house that contains examples of every monarch for the sovereign denomination, according to Steve Hill, director of British coins at Baldwin’s.

“We felt 2014 was the year to expand on the success of last year’s sale of The Bentley Collection,” Hill said.

The Hemisphere Collection tracks the sovereign from its inception in 1494 to today and, unlike the Bentley Collection, offers both handmade hammered and milled (machine-made) coinage “to give the fullest outline of the sovereigns’ history, offering collectors of both hammered and milled sovereigns an unprecedented opportunity to celebrate the denomination together,” Hill said.

In 1936, Edward VIII ascended to the throne following the death of his father, George V. However, Edward VIII famously abdicated his position just 326 days after his accession, so he could marry American divorcee Wallis Simpson.

His then-non-traditional marriage plans fit a pattern for Edward VIII's short reign – casting aside tradition. Tradition called for coinage portraits to alternate in direction with the change of each reign, but Edward VIII would not have it. Edward VIII preferred that a left-facing portrait be used, although it would mean his profile would face the same direction as his father's face appears on George V coins.

Coinage designed in harmony with Edward VIII's preference was created, but, days before circulation production could begin, the few coins prepared were rendered moot by his abdication on Dec. 10, 1936. He was the first monarch to step down voluntarily. Edward and Simpson married soon after and Edward’s brother George became the next king of England.

A small number of examples of Edward VIII's coins, both individual pieces and sets, are known today. Thanks to the controversy and limited mintage, the 1937 Proof gold sovereign of Edward VII is a legendary coin of the highest rarity.

According to Baldwin’s, this is the sole example of the Edward VIII sovereign available individually. It was sold in 1981 by Spink in a private transaction. Spink sold it again in a 1984 auction of the Professor R.E. Gibson Collection, where it realized a hammer price of £40,000. It was later sold in a 2008 auction in Tokyo (price unavailable).

When Queen Elizabeth II ascended the throne in 1952 on the death of her father, no Proof set was issued, but a small number of Proof gold sovereigns were produced for national institutions to display publicly for the Coronation.

The Proof 1953 gold sovereign is probably the most valuable coin of the current queen, and is the second rarest of the 20th century Proof sovereign series.

The example in the Hemisphere Collection once was part of the collection at the National Museum of Wales, which sold its collection of sovereigns, with official permission, in 1990. The collection was sold in 2005 to dealer Mark Rasmussen, who then “broke” the collection, dispersing the individual components, according to Baldwin.

The British sovereign is familiar today as a bullion coin, but its origins date to 1489, following the long and bloody War of the Roses, when it was introduced as a political propaganda tool to emphasize the stability and power of Henry VII. It had an initial face value worth 20 shillings, but its value as currency changed over time.

An example of that first sovereign, struck circa 1502 to 1504 by hand (what collectors call “hammered” coinage), is also part of the Hemisphere Collection.

The original sovereign was the largest British coin in both size and value, with the reverse bearing the double Tudor rose, symbolizing the union of the York and Lancaster Houses, and reinforcing its political message. This example has a tiny spot on the reverse and some slight doubling on the obverse, but is otherwise Good Very Fine, according to the firm. It is estimated at £100,000 to £120,000 (about $165,327 to $198,393 U.S.).

Sovereigns continued to be issued by the Tudor and Stuart monarchs until the reign of James I, when the coin began appearing in different guises termed as “Pound,” “Unite” and “Laurel,” which lasted for more than 200 years until the recoinage of George III in 1816 and 1817.

The sovereign name returned, and a new design and smaller size were adopted, showing St. George slaying the dragon in a design created and engraved by chief medalist for the Royal Mint, the Italian artist Benedetto Pistrucci.

The rarest London Royal Mint sovereign is an 1819 example of George III, one of eight currency or circulation examples known to exist from a reported mintage of 3,574 pieces.

The Hemisphere Collection example of the 1819 sovereign has never been offered at public auction before, according to the auction house, and the only previous record of the coin is in the Royal Mint publication Royal Sovereign 1489-1989.

The Hemisphere Collection is being sold in one sale, on May 8 in London. The catalog will be available to view online at www.baldwin.co.uk and online bidding with no additional buyer's fee is available at www.the-saleroom.com.

For more information about the collection or a preview catalog, visit the firm’s website, telephone Baldwin at (011) 44 20 7016 1700 or email the company at bids@baldwin.co.uk.