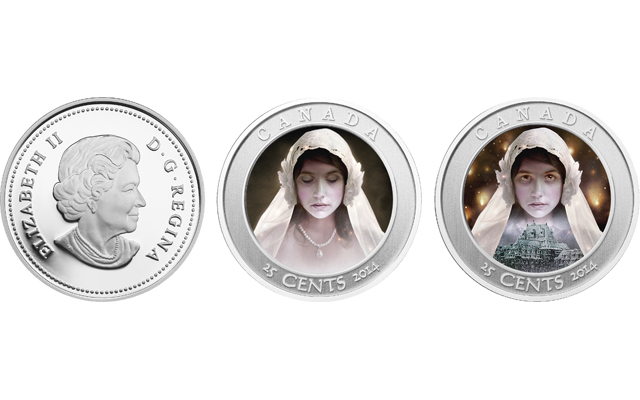 The first coin in the Haunted Canada series celebrates the “Ghost Bride” at the Fairmont Banff Springs Hotel in Alberta, Canada. Tilt the coin and the bride’s eyes open and candles appear in the background, thanks to lenticular technology. 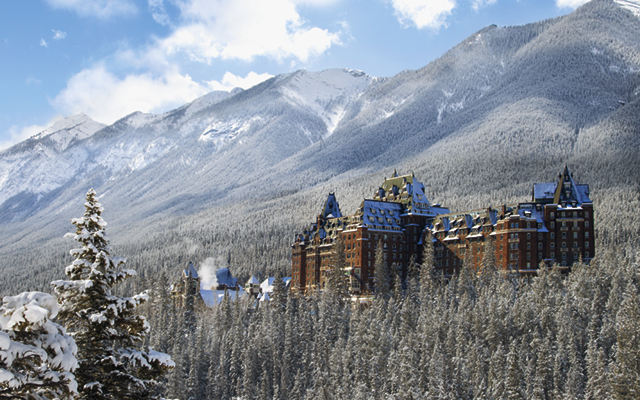 The Fairmont Banff Springs Hotel is said to be home to the Ghost Bride since a women died there in the 1930s.

There is one reported guest at the Fairmont Banff Springs Hotel in Alberta, Canada, who never checks out, and now the ghostly inhabitant is being featured on a new coin.

The Royal Canadian Mint on June 2 unveiled at the hotel the first 25-cent coin in the Haunted Canada series, which honors the “Ghost Bride.”

Legend suggests that the “Ghost Bride” has made the Fairmont Banff Springs her eternal home since the 1930s when, upon stepping onto the staircase, she suddenly stumbled and tragically fell to her death. Since then, some claim to have seen an apparition dancing in the hotel’s ballroom or walking down the staircase, as she did on that fateful day that brought a tragic end to her love story.

The copper-nickel 25-cent coin’s reverse design features a portrait of a bride with her eyes closed, her bridal headdress softly cascading over her shoulders.

Through lenticular technology, a “haunting” effect is produced when the coin is tilted: the bride’s eyes suddenly spring open, the candles that line the staircase light up the previously black background, and below the Ghost Bride, an image of the Fairmont Banff Springs Hotel appears.

The coin was unveiled simultaneously as a new stamp series from Canada Post, which includes the Ghost Bride as seen on the coin with eyes open. Other themes of the stamps are Prince Edward Island’s Northumberland Strait, Quebec’s Chateau Frontenac Hotel, Ontario’s Fort George and the St. Louis Ghost Train in Saskatchewan.

While the RCM has not disclosed future themes in the Haunted Canada coin series, given the partnership between Canada Post and the RCM (Canada Post is the largest distributor of RCM collector coins), the coins are likely to match the themes of the stamps. Similar cooperation has resulted in many coins and stamps with matching themes in recent years.

The 25-cent coin is oversized; it measures 35 millimeters in diameter, compared to the circulating version measuring 23.88 millimeters. The coin bears a Specimen Finish.

Public sales of the coin began June 3. The coin has an official issue price of $29.95 Canadian from the RCM.