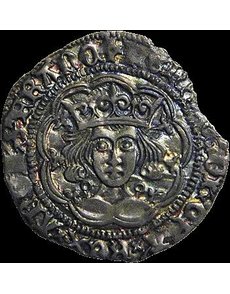 Image courtesy of Michael Bugeja.This hammered Uncirculated fourpence of Henry VI issued during his reign of 1422 to 1430 was struck at the Calais Mint. A minter placed a planchet on top of a bottom die and then struck the upper die with a hammer to create images on both sides of the coin.

Recently I had the opportunity to travel to Oxford University, England, to present my research at an ethics conference there. When I visit a new place, I try to purchase a coin from that area as a remembrance.

At my hotel I asked where to find a coin shop and was directed to “Antiques on High,” operated by numismatist Roger Box.

I bought a wonderfully rainbow-toned Uncirculated fourpence of Henry VI, issued during his reign of 1422 to 1430 from the Calais Mint. The coin has a clip, so it likely cannot be professionally encapsulated. But at £120 (about $190), I just couldn’t resist.

He was known for his peaceful, pious ways — punctuated by bouts of insanity leading to his downfall.

My Henry VI coin is hammered. A minter placed a planchet on top of a bottom die and then struck the upper die with a hammer to create images on both sides of the coin.

Hammered coins were often clipped because they lacked reeded edges, which evolved with machine-minted coins.

Buying the coin at Antiques on High brought another bonus — getting to know Roger Box.

Roger was a schoolboy in the mid-1960s when Britain was building its modern motorway system.

“I lived in a small village next to a massive interchange construction site,” he said. He and other children were encouraged to explore the “vast spoil heaps” coming to the surface — “impossible today due to health and safely concerns” — to see what they could find. That’s how he built up his collection “consisting mainly of Roman pottery and coins,” he notes. “As a result of this I’ve been a keen coin collector ever since.”

Roger can trace his ancestral lines back to the Wessex area of Saxon England and on back to Malmesbury, a small Saxon borough in Wiltshire.

“Unfortunately these are some of the rarest coins in the world because so few were minted, and those that were, were subsequently melted or used to pay off the Vikings in the 10th century,” he said.

Roger’s collection consists of silver pennies from various mints from throughout Aethelstan’s kingdom. His rarest coins are pennies depicting King Harold (1034 to 1040) and Edward the Confessor (1042 to 1066), both from the Malmesbury Mint.

I love British coins because they come with stories and histories. While my travel to Oxford, England was in the 21st century, my Henry VI coin helps me time-travel through the portal of our hobby.