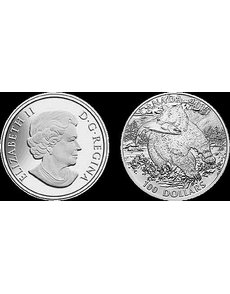 Collectors seeking to snap up the Royal Canadian Mint’s second release in the $100 Wildlife in Motion series of coins offered at face value had at least several days in which to act.

Public sales of the Grizzly .9999 fine silver coins began Sept. 23, several days after Masters Club members (those who spend $1,000 or more in a year with the RCM) received their customary priority ordering access. As of the morning of Sept. 27, the coin remained available to customers through the RCM website.

The Matte Proof Grizzly coin has a mintage limit of 50,000 pieces, just like the first issue in the series, honoring the bison. The debut Bison coin in the series, which has a Reverse Proof finish, sold out in less than two days.

The $100 coins were being offered at face value plus shipping and handling, with a limit of three per household, to addresses in Canada and the United States only.

The $100 series joined the popular 20-for-20 offering of small Specimen Finish silver $20 coins at face value. The first nine coins in that series sold out their mintage limit of 250,000 pieces, with the tenth coin in the series almost sold out of its 225,000 mintage.

The $100 Wildlife in Motion Grizzly coin features Claudia D’Angelo’s design on the reverse, showing a massive grizzly bear splashing in a remote river, clutching a salmon in its mouth.

The design highlights the bear’s large front claws and paws, with the thick, wet fur rendered in detail against a conifer-line mountainous backdrop. Grizzly bears are “one of Canada’s most reclusive, massive and iconic land mammals,” according to the RCM.

The $20 for $20 model has been imitated in the United Kingdom by the Royal Mint, which recently launched a £20 for £20 program.

The concept is not entirely new, as mints in Austria, Germany and Switzerland have offered silver collector coins at face value through post offices for decades, though the spike in precious metals prices in 2010 forced changes to those programs. The Monnaie de Paris still issues an annual program of face value silver and gold coins.

Delivery of the Grizzly coin is not expected to begin until Nov. 13 at the earliest.

Gatewest Coin Ltd. and Talisman Coins are official distributors for the RCM.

Visit the Talisman website at www.talismancoins.com or telephone the business at 888-552-2646. ¦