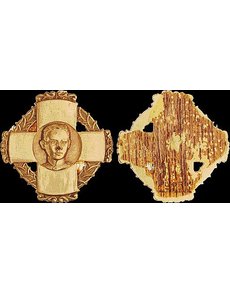 Finding a pattern or model strike of a military decoration is a rare event. It is also unusual to find a decoration named for a youthful warrior acclaimed in an unsuccessful struggle for independence, then “adopted” as a hero by two succeeding regimes, years apart.

This is the story of Philippine patriot Gen. Gregorio del Pilar (1875 to 1899) and the Wounded Personnel Medal established in 1947 by the newborn Republic of the Philippines.

The medal is represented in the American Numismatic Society collection as a uniface gold (or massively gold-plated) strike without loop or ribbon. The residue on the reverse is from an old exhibit mount dating from the medal’s days in the Philippines.

During the Spanish-American War of 1898, American naval forces under Commodore George Dewey overcame Spanish resistance and captured the capital, Manila, partly with the help of Filipino revolutionaries led by Gen. Emilio Aguinaldo. Hoping that the Americans would free the islands from the Spanish, Aguinaldo convened a revolutionary Congress and proclaimed an independent republic.

The United States insisted on annexing the islands to prepare them for future independence. Americans called the ensuing struggle the Philippine Insurrection; Philippine nationalists called it the War for Independence. It was a bloody guerrilla war that dragged on until 1902.

An epic battle took place Dec. 2, 1899, 4,500 feet up in the mountains of Luzon at the lofty Tirad Pass. Aguinaldo and his command evaded American pursuers under Maj. Peyton C. March with 300 American soldiers and a detachment of Macabebe Scouts. The Filipino rearguard of 60 riflemen under the college-age del Pilar held up the American advance until Aguinaldo escaped.

Last to fall was the “boy-general.” His body was at first tossed aside, but an American officer arranged burial with military honors and erected a suitable monument. Fast-forward 45 years to a Philippines under Japanese occupation, nominally ruled by a second republic under President José Paciano Laurel. Before the return of Gen. Douglas MacArthur and the exiled Commonwealth government in 1944, Laurel established a Tirad Pass Medal for his government’s Philippine Constabulary.

All but one of the 15 recipients of that decoration received it posthumously. It is rare today.

The third republic was inaugurated July 4, 1946, and on Oct. 6, 1947, established the Wounded Personnel Medal for troops injured or killed in action, or who qualified for the pre-1941 Wound Chevrons. The 37-millimeter bronze cross bore a high relief facing bust of Gen. del Pilar and was made by José Tupaz’s Manila firm “El Oro.”

The ANS example is believed unique.

David T. Alexander is author of American Art Medals, 1909-1995 and a fellow of the American Numismatic Society.

He can be reached at alexander.numismatics@gmail.com.