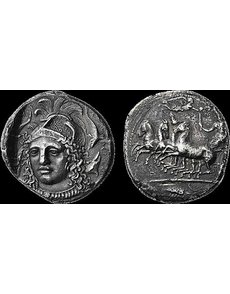 “The fight for this coin just went on and on with two bidders fighting it out ’til it hit this terrific price,” said Alan Walker, director of Nomos.

The Sicilian silver tetradrachm was struck circa 410 to 400 B.C., according to Nomos.

The obverse shows a quadriga galloping to the left, being driven by a goddess (perhaps Persephone) with Nike flying above.

Experts debate whether the portrait appearing on the reverse is of Athena, who is typically found on coins in Athens, or Arethusa, a well-established symbol on the Syracusan coins.

“At around the time this coin was issued Sicily was facing yet another Carthaginian invasion — which resulted in the destruction of Akragas — so a coinage honoring Athena would be quite appropriate,” according to the auction firm.

The coin is signed by the engraver Eukleidas in very small letters inside the helmet worn by the allegorical figure depicted on the reverse of the piece.

The coin weighs 16.56 grams and measures 28 millimeters in diameter, making it slightly wider than a Presidential dollar and twice as heavy.

The date of issue is in question, with the strike either during the last years of the Democracy, or shortly after Dionysos I seized power in 405 B.C.