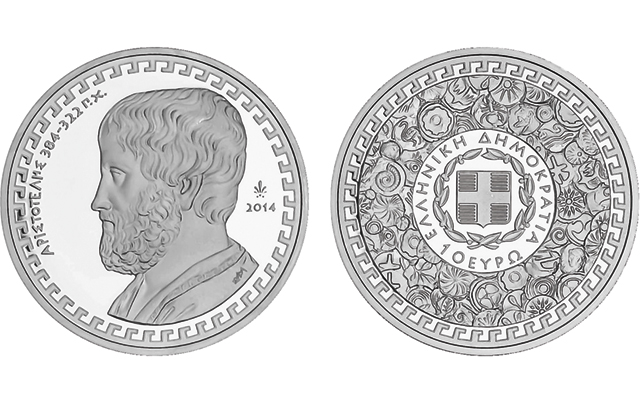 The philosopher and scientist Aristotle is the subject of the latest Proof Greek Culture .925 fine silver €10 coin from Greece.

The coin shows a profile of Aristotle, based on ancient sources, on the obverse. At the border in front of his face are inscriptions in Greek of his name and years of birth and death (384 to 322 B.C.). The 2014 year of issue shown in the field behind his head.

The reverse depicts a coat of arms surrounded by symbols and circles.

The design is credited to G. Stamatopolous.

Aristotle was born in Stagirus, northern Greece. At 18 years old, he joined Plato’s Academy in Athens and remained there until the age of 37. The subjects of his writings include physics, biology, zoology, metaphysics, logic, ethics, aesthetics, poetry, theater, music, rhetoric, linguistics, politics and government, and his work constitutes the first comprehensive system of Western philosophy.

Shortly after Plato died, Aristotle left Athens and, at the request of Philip of Macedon, tutored Alexander the Great.

The coin weighs 34.1 grams, measures 40 millimeters in diameter and has a mintage limit of 1,200 pieces. It was released June 10 by the Bank of Greece, but delivery to the American distributor took several weeks and is ongoing.

The official issue price was €65, but the limited mintage has driven prices up in the secondary market.

Distributor Royal Scandinavian Mint sells the coin for $240 in U.S. funds, with a limit of one coin per customer.