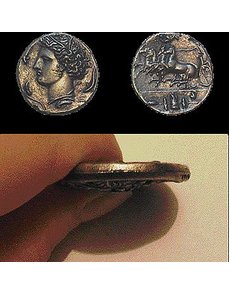 Replica of an ancient Greek coin from Syracuse that weighs 24 grams as compared to an authentic piece having an approximate weight of 43 grams.

When searching through my father’s shed in Michigan, I found this coin, and it looks similar to others that have sold for small fortunes at auction.

I cannot tell if it is real or not. It has a seam on the edge and weighs 24 grams.

What do I have?

What you have is electrotype reproduction of an ancient Greek coin from Syracuse that was not made to deceive.

The piece you have replicates a decadrachm coin by Kimon, circa 400 B.C. Kimon was a master engraver of ancient Greek coinage whose distinctive style is identifiable today, even on pieces he did not sign (some of his coins bear the Greek letters KI as his signature). He and fellow engravers such as Euainetos created beautiful, bold, high-relief designs in styles that centuries later inspired President Theodore Roosevelt and Augustus Saint-Gaudens to pursue a high-relief gold coinage for the United States.

The obverse of the coin shows Artemis-Arethusa’s head and the reverse depicts a chariot, or quadriga, being pulled by four horses with a charioteer at the helm. Nike flying overhead is at the top of the reverse.

A genuine decadrachm of Syracuse of the fifth century B.C. was a large, heavy coin. According to the website kimoncoins.com, an authentic piece would weigh approximately 43 grams, well more than an American Eagle silver dollar’s weight (31.1 grams).

Even though they are not genuine coins, electrotypes can be collectible. Electrotypes were made of some rare coins, often so a collector could own a less expensive version or so an owner of a real coin could display a high-quality reproduction rather than a more valuable genuine piece. They were not intended to be deceptive, as would a counterfeit coin.

While not visible in the photograph you shared, if the edge of the electrotype has the marking “RR” on it, its presence could make your piece more collectible.

The “RR” stands for Robert Ready, who worked for the British Museum; replicas with his initials are sought after.

It is also important to note that, today, coin replicas are required to be marked “COPY” in accordance with the Hobby Protection Act.