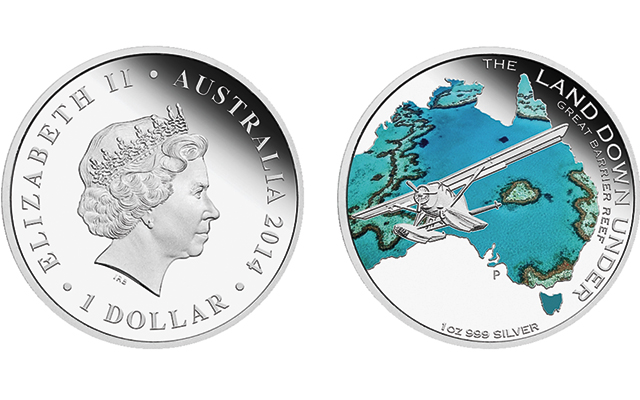 An aerial view on this Proof 1-ounce silver $1 coin highlights the majesty and size of Australia’s Great Barrier Reef, the latest subject of the Perth Mint’s Land Down Under series. 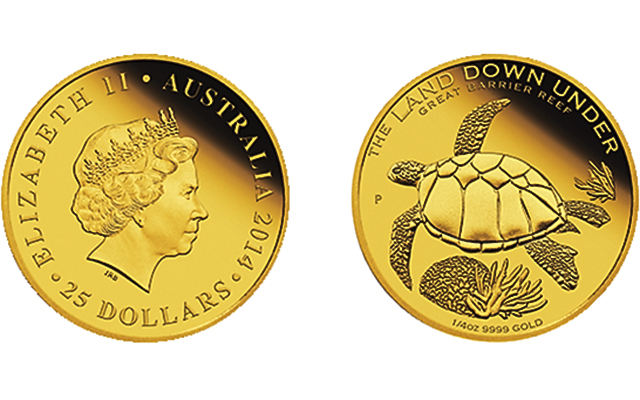 A green sea turtle frolics on a new Proof quarter-ounce gold $25 from Australia. The coin is part of the Land Down Under program, and honors the Great Barrier Reef.

Australia is a continent rich in history, cultural diversity and unique habitats.

No geographic feature may be more spectacular than the Great Barrier Reef, which is the largest living structure on the planet and one of the seven natural wonders of the world.

Two new Proof coins in the Perth Mint’s Land Down Under series celebrate the Great Barrier Reef. The 1-ounce .999 fine silver dollar and quarter-ounce .9999 fine gold $25 coin are the newest additions to the Land Down Under program, which will celebrate four themes with 10 coins overall.

Australia’s Great Barrier Reef, encompassing 344,000 square kilometers along the coast of Queensland in the country’s northeast, attracts more than 1.6 million visitors annually who swim, snorkel, dive, and sail in the thriving environment.

Featuring an array of coral and a variety of other marine creatures, from microscopic plankton to whales weighing more than 100 tons, the reef offers some of the most spectacular maritime scenery on Earth.

Both coins carry the inscriptions THE LAND DOWN UNDER and GREAT BARRIER REEF with the Perth Mint’s P Mint mark and the weight and fineness of the coin.

Designer Natasha Muhl designed the reverse of each coin.

The silver coin’s reverse depicts a colorful aerial view of the Great Barrier Reef, framed within the shape of Australia with a seaplane flying overhead.

The obverse of both coins features the Ian Rank-Broadley effigy of Queen Elizabeth II, the denomination and 2014.

The final two themes for the program, also be offered as 1-ounce silver and quarter-ounce gold coins, are the Australian Stockman and Rock Fishing.

Each coin is housed in an Australian map-shaped latex case with a stylized shipper, and is accompanied by a numbered certificate of authenticity.

The silver coin retails from the Perth Mint for $99 in Australian funds and the gold coin is priced at $695 Australian.

Distributor Talisman Coins offers the silver coin to collectors in North America for $79.95 in U.S. funds, and the gold coin is priced at $529.95 U.S.