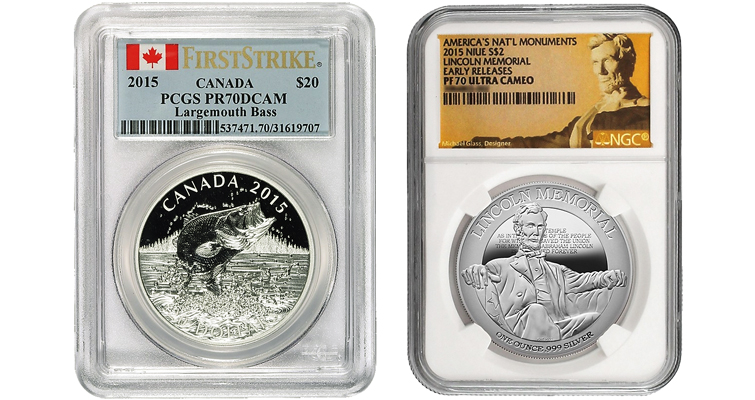 Two 2015 coins, from Canada and Niue, represent the market demand for graded “perfect” (70) coins. One distributor said coins such as these sell better when encapsulated compared to being kept in their original government packaging.

Editor's note: this is the third part of a series by Louis Golino exploring the demand for modern graded coins. The feature appears in the September monthly issue of Coin World.

Professional Coin Grading Service and Numismatic Guaranty Corp., the industry leaders in third-party grading, are now grading more world coins than ever; they continue to expand the world coin sections of their census reports; and both companies have opened offices in Europe to coordinate grading submissions.

PCGS opened a Paris office a couple years ago, and has an office in Hong Kong for submissions from Asia. NGC opened one in Munich in August of 2014. These companies clearly see a growing market for graded coins overseas.

Another key reason that the market for graded modern issues has expanded is that the leading dealers and distributors in this area, such as Modern Coin Mart, American Precious Metals Exchange, SilverTowne, Modern Coin Wholesale and others, have made the graded coins a major component of their business in recent years.

Ron Drzewucki, owner of Modern Coin Wholesale, told Coin World his company has seen growing demand for modern world coins and that sales of such coins doubled from 2013 to 2014. The best-selling world coins at MCW are “the yearly releases, such as Canada’s Maple leaf, Mexico’s Libertad, China’s Panda, Austria’s Philharmonic, and Australia’s Koala,” he said.

Drzewucki also noted that, with respect to the yearly bullion releases, ungraded coins tend to sell more, but when it comes to commemorative coins such as the Canadian Wildlife series and the new American National Monuments series from Niue, graded coins, especially Proof and MS-70 pieces, tend to sell best.

The online auction site eBay has also been instrumental in the growth of the modern world coin market, and eBay coin sales are dominated by large coin dealers.

MCM is the largest coin and bullion seller on eBay in terms of the number of transactions, based on feedback information readily available on eBay, and runs neck-and-neck with APMEX in dollar sales volume, according to information from a third-party analytics company.

Typically, when a major new world coin is released, these companies purchase a significant number of coins from the issuing mint and have most of them graded before offering them for sale.

In addition, in some instances, one dealer is responsible for the entire graded population of a particular coin. This has a lot to do with the fact that the cost for a collector to have individual coins graded is much higher than the prices dealers pay per coin for large bulk submissions.

In addition, these companies have increasingly entered into arrangements with issuing mints to create exclusive coins at the coin dealers’ initiative, which are often designed by artists that work for the coin companies and are then sold both graded and ungraded. These exclusive deals have greatly expanded the range of coins being produced today.

If a particular coin or series is widely collected around the world, examples graded 70 are sometimes worth substantially more than the same coin in the next lower grade, even though most people are unable to tell the difference even with magnification. A good example is the Australian Proof 2014 Wedge-tailed Eagle, High Relief coin, the first in a new series that immediately garnered a lot of interest from collectors.

Though issued in an array of sizes in silver and gold, the one-ounce silver version of the Proof Wedge-tailed Eagle, High Relief coin remains a very popular coin because of its attractive design, and because it was designed by former U.S. Mint Chief Engraver John Mercanti, who also designed the reverse of the American Eagle silver bullion coin.

Most of the graded examples of this Australian coin are encapsulated by PCGS.

The popular 2013 and 2014 Canadian Superman silver and gold coins are another series in which graded Proof 70 coins are worth substantially more than ungraded examples.

On the other hand, some popular issues sell for about the same amount whether ungraded or in 70, and often at a discount in 69. This poses risks for the owner who pays to submit an ungraded coin, hoping to receive a 70 grade, but may end up with a devalued coin if the grade is less than perfect.