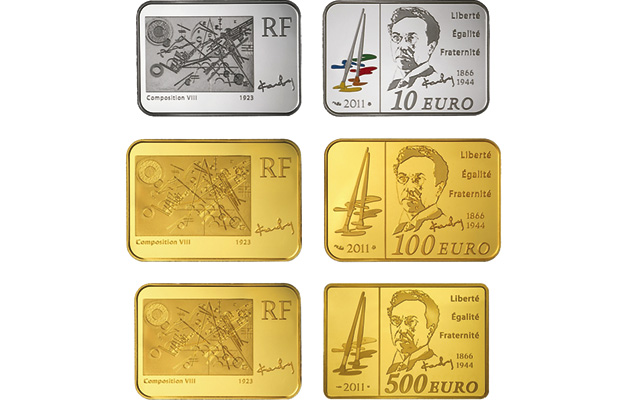 Wassily Kandinsky, the subject of a Google Doodle on Dec. 16, 2014, marking his 148th birthday, was also honored on three coin issued in 2011 by the Monnaie de Paris.

Russian artist Wassily Kandinsky, the subject of a Google Doodle on Dec. 16, his 148th birthday, is also honored on commemorative coins.

The Monnaie de Paris in 2011 featured Kandinsky on the second-to-last issue in that mint's two-year Painters series.

Kandinsky was an art theorist as well as painter, and is credited with painting the first purely abstract works.

Born in Moscow, Kandinsky spent his childhood in Odessa. He enrolled at the University of Moscow and chose to study law and economics. Though successful at his profession, Kandinksy began painting studies (life-drawing, sketching and anatomy) at the age of 30.

After World War I, Kandinsky moved to France where he lived for the remainder of his life, becoming a French citizen in 1939.

The Proof .999 fine gold €500 coin measures 37 millimeters tall and 53 millimeters wide. Its mintage was limited to 99 pieces, perhaps making it as rare as a Kandinsky painting.