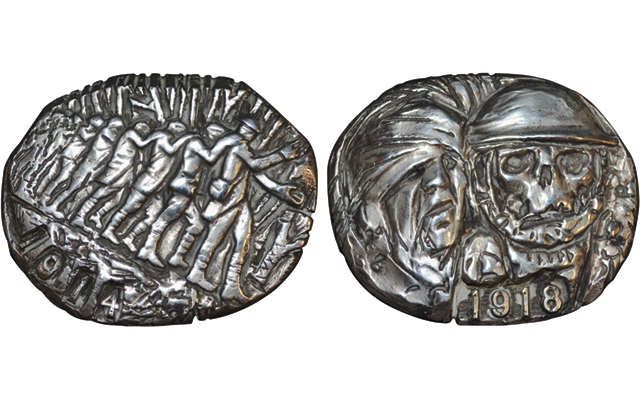 A unique silver art medal designed by Royal Academy of Art member James Butler was commissioned by the Goldsmiths’ Company.

Images courtesy of the Goldsmiths’ Company.

To commemorate the 100th anniversary of the start of World War I on July 28, the Goldsmiths’ Company commissioned eminent sculptor James Butler, a member of the Royal Academy of Arts, to design and create a unique commemorative art medal in silver.

The result combines skilled craftsmanship with a poignant message for future generations, according to the Company.

On the obverse, Butler depicts a line of blinded soldiers guiding one another after a gas attack. The imagery powerfully recalls John Singer Sargent’s haunting painting, Gassed, 1919.

On the reverse, a wounded soldier — head heavily bandaged — and a tragically contorted skull bring the horror of World War I into even more shocking focus.

The reverse design references the work of the British sculptor Charles Sargeant Jagger (1885 to 1934), himself a veteran of the war. Jagger’s best-known work is the Royal Artillery Memorial at Hyde Park Corner.

When commissioned, Jagger told the Daily Express newspaper that his experience in the trenches had persuaded him of “the necessity for frankness and truth.” He successfully challenged, for the first time, the convention that war memorials should depict only living soldiers and never the dead or dying.

Building on this legacy, Butler’s medal laments the tragic consequences of war for all involved. In shape and design, it breaks with convention to condemn war, rather than celebrate victories or heroics.

Butler’s unique centenary art medal will now enter the Goldsmiths’ Company’s renowned collection. Comprising 8,000 masterpieces dating from 1300 to the present day, it represents one of the most important collections of its kind in the United Kingdom.

Butler is best known as a sculptor but has designed the Royal Seal of the Realm, the Jubilee coin and a commemorative 50-penny piece. Encouraged by the Goldsmiths’ Company, Butler agreed to take on this historic art medal commission.

Born in London in 1931, Butler trained at St. Martin’s School of Art and the Royal College of Art, before spending a decade as a professional stone carver. He then began working on monumental figurative sculptures in bronze, such as the winged figure of Daedalus, a memorial to the Fleet Air Arm that has stood in London’s Embankment Gardens since 2000.

Butler was first elected a member of the Royal Academy of Arts in 1964. He works in his Warwickshire studio.

The medal is not the artist's first work of art dealing with World War I. In 2011, Butler's Rainbow Division Memorial, a bronze sculpture, was placed at the site of the Battle of the Croix Rouge Farm in Fère-en-Tardenois, France. The memorial commemorates the service of an American Army division that fought in France during the war.

The medal is a one-off commission. Examples are not being made for sale.