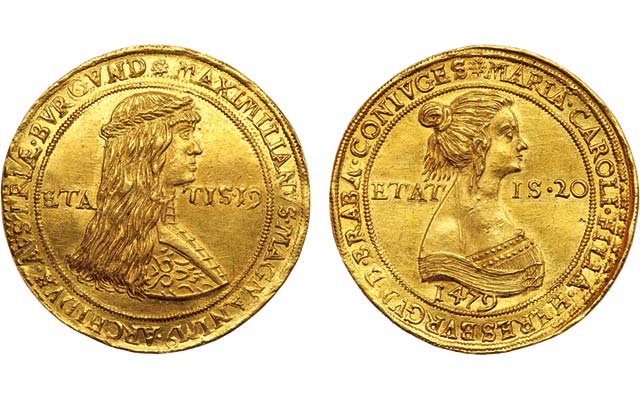 A gold 7 ducats of Maximilian I marks his marriage to Maria of Burgundy. Though dated 1479 (when the marriage began) it was not issued until after 1511. Only three pieces are known in gold.

A gold ducat of Maximilian I captures a famous love story among the European monarchy.

The 1511 gold 7-ducat piece, dated 1479, was struck decades after the event it memorializes, the marriage of Maximilian I of Habsburg with Mary of Burgundy in 1479.

Inspired by an Italian Renaissance marriage medal from 1477 by Giovanni Candida, the emperor commissioned a silver ducat (and multiple ducat versions including the gold example in this sale) to mark his own marriage.

He only issued the medal after a second, loveless and childless marriage had concluded.

RELATED: Read another Coin World story about this medal and coin

During their marriage, Maximilian and Mary were celebrated as the most attractive noble couple in Europe, according to the auction house.

Mary “The Rich” was the wealthiest young woman of her time and therefore a most desirable marriage candidate. At least a dozen important rulers wanted to marry her.

Her father, Charles the Bald (1433 to 1477), died a few months before she was married, bequeathing to her Burgundy, one of the wealthiest duchies in Europe at that time.

Maximilian, on the other hand, the only surviving son of Emperor Frederic III of Habsburg, grew up in a simple court and was always in need of money, which made his marriage to Mary a perfect match.

He was a handsome and intelligent young man, and fell in love at first sight, according to Goldberg.

Tragically, after only five years of marriage, Mary died when she was crushed by her horse during a riding accident, leaving Maximilian and their son, Philip the Beau, in mourning.

Maximilian married again, to second wife Bianca Maria of Sforza from Milan, who died in 1511.

It was only upon Bianca Maria's death that he commemorated his first and true love by commissioning this coin, illustrating a royal love story unusual for that or any other time.

The coins (also called “schauguldiners” or “wedding talers”) were struck at the Hall Mint in Austria.

Goldberg reports that this example is the finest of three known pieces, with a provenance dating back at least to the 1936 Asolph Hess auction in Vienna of the collection of Count Arthur Enzenberg. There it sold for 2,700 Swiss francs, the highest price in that auction.

The estimate for the piece in the Goldberg auction is $500,000 "and up," according to the firm.