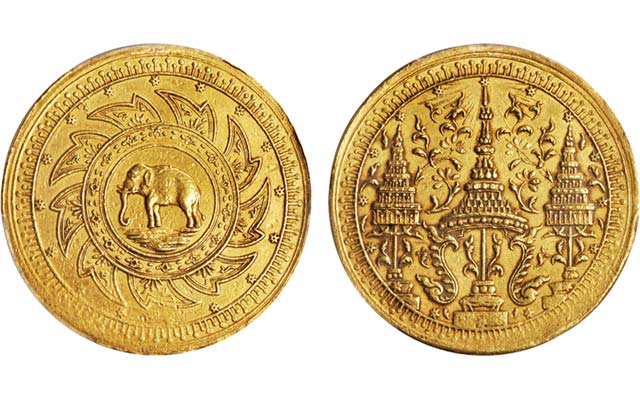 When the king wants to make a good impression, a little gold goes a long way.

A “very rare” gold 2-baht coin from Thailand, struck in 1864 but not dated, is an example of a potentate using the power of the purse. The coin highlights Stack’s Bowers and Ponterio’s Hong Kong auction March 30 and April 1.

The coin bears the design of the 2-baht coin but its gold weight gives it an equivalent value of 32 baht, according to the auction house. Gold versions of these usually silver coins were rarely struck, only for special occasions like coronations, cremation ceremonies and other state events.

“These were special presentation pieces struck specifically for the King and given as gifts to the social elite,” the cataloger writes. “As is the case with prestigious high value coinage issues, this particular piece was previously mounted, and most likely attached and displayed as a pendant. This would immediately alert observers to the notion that the bearer was in the good graces of the monarch.”

The coin is “still quite attractive despite the previous evidence of mounting,” but because of that damage is identified by Professional Coin Grading Service as “Genuine — Mount Removed, A[bout] U[ncirculated] Details,” in a PCGS Secure holder.

For full details of the sale, visit the auction firm website.