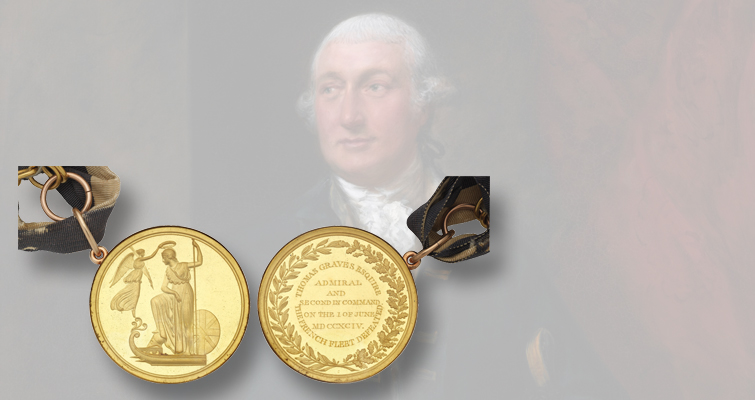 British naval Admiral Lord Graves had a less than stellar career, but some artifacts of his life on the seas are drawing interest.

Bonhams in London auctioned a rare gold medal presented to Graves for the British Fleet’s victory at the Battle of the Glorious First of June, in 1794 during the French Revolutionary War. The medal, as well as an engraved Lloyds presentation trophy and seven logs and letter books, realized £314,000 ($442,014 U.S.), including the buyer’s fee, against an estimate of £140,000 to £160,000. The premium is 20 percent on the first £70,000 and 15 percent of any amount thereafter.

The Lloyds presentation trophy is a twin-handled silver-gilt cup in recognition of the admiral’s gallant conduct on the “ever memorable 1st of June 1794.”

Admiral Lord Graves (Thomas Graves, 1st Baron Graves) captained HMS The Royal Sovereign during the Battle of the Glorious First of June, his most notable engagement.

His medal is one of only seven large examples awarded for the victory, according to the auction house.

The obverse of the medal depicts Britannia, a spear in her left hand and a shield below, standing on the deck of an antique galley. Her right foot rests on a helmet and a winged victory crowns her with a wreath.

The reverse features a wreath formed from oak (right) and laurel (left) encircling the periphery. An engraved inscription within reads “Thomas Graves Esquire Admiral and Second in Command on the 1 of June MDCCXCIV. The French Fleet Defeated.”

The medal has a gold chain and neck ribbon.

John Millensted, director of Coins and Medals for Bonhams, said, in a press release, “This is an incredibly scarce and desirable medal in excellent condition and its rarity is reflected in the [result].”

The Battle of the Glorious First of June was the culmination of months of indecisive skirmishing between the British Navy and the Atlantic Fleet of Revolutionary France. The encounter was sparked by British attempts to prevent a grain convoy from America reaching France. The French population faced possible starvation following poor harvests and the successful blockading of many French ports, according to the auction house.

Although both sides suffered losses, and the grain convoy got through, the victory — both on the day and in the longer term — belonged to the Royal Navy. The French fleet limped back to its home port of Brest in Brittany and was blockaded there until the French Revolutionary Wars finally ended in 1802.

The defeat severely damaged the prestige of the French Navy and led to a gradual decline that culminated in comprehensive defeat at the Battle of Trafalgar in 1805.

Admiral Lord Graves came from a distinguished naval family and served a long time, although his career was characterized by a mixture of poor judgment and bad luck, according to Bonhams.

He was court martialed in 1756, during the first year of the Seven Years War, for failing to engage the enemy and was reprimanded. In 1761 he became Commodore-General of Newfoundland, where he shepherded shipping convoys from Britain to Canada.

He saw action during the American War of Independence but his defeat at the Battle of Chesapeake in September 1781 proved disastrous and led directly to the surrender of Lord Cornwallis to George Washington at Yorktown. This was the decisive event of the war and effectively brought it to an end.