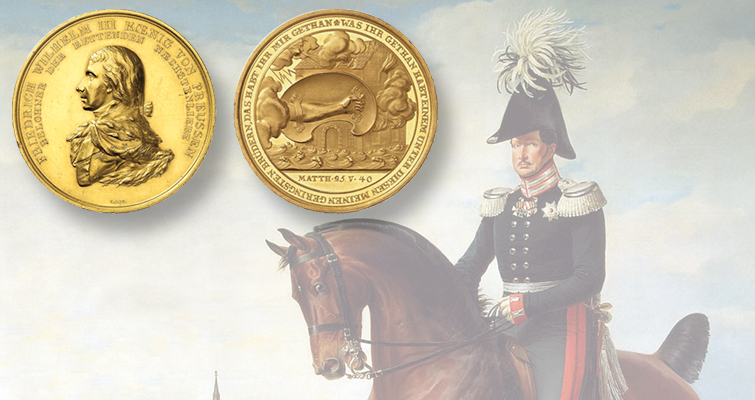 The auction, the Osnabrück, Germany, firm’s 271st, is scheduled at the Estrel Hotel one day before the World Money Fair.

The gold medal of 16 ducats weight was issued under King Frederick William III, who reigned from 1797 to 1840. Though silver examples of the medal are known in other collections, this is the only gold example available to the market, according to the firm, with one other example reportedly in a collection in Poland.

This specific example was issued in 1804 to Steinhoefel Kruger in New Angermünde. It is accompanied by the signed letter from the king dated May 3, 1804, and the original presentation case. It may have been awarded for a rescue during flooding in Silesia that year.

The medal shows the king on the obverse with a legend about rewarding the lifesaving event. The reverse shows a burning house amid lapping waves and an anthropomorphic cloud blowing wind, over which is superimposed an arm displaying a shield, all surrounded by an inscription. The wording translates to “What you have done for the least of these brethren, ye have done to me,” which is taken from the biblical verse Matthew 25:40. The biblical source is indicated below the scene.

Other examples of the medal in gold may have been issued in 1802 or 1820 — the firm’s research on this point is unclear — but so far this is the only example on the market. A Polish collection apparently features a soldered example in gold as part of a tankard, the firm said. The medal at auction weighs 54.98 grams and measures 50 millimeters in diameter.