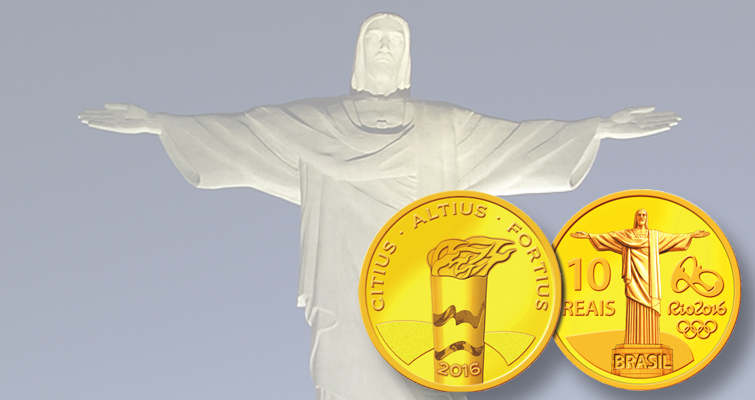 The most iconic image of Rio de Janiero and Brazil itself is the Art Deco Christ the Redeemer statue, which was chosen for the common reverse of all four Proof gold coins in Brazil’s Olympic Games coin program.

Images courtesy of the Banco Central do Brasil and Flickr user Cyro A. Silva.

Editor's note: this is the final part of a story by Jeff Starck about Brazil's 2016 Olympic coin program. The story originally appears in the August monthly issue of Coin World.

Each of the four gold 10-real coins in Brazil's 2016 Olympic Games coin program shares a common reverse showing what may be Brazil’s most iconic image, the Christ the Redeemer statue outside of Rio.

The statue was built between 1922 and 1931 and is listed as one of the New Seven Wonders of the World, making it a fitting choice for the common design of Brazil's highest denomination (and in the most precious of metals) Olympic coin for 2016.

The reverse also depicts the five Olympic rings and the Rio 2016 logo.

The obverses of all four Rio 2016 Games gold coins carry the CITIUS ALTIUS FORTIUS motto of the Olympics, which translates to “Faster, Higher, Stronger.”

On the gold coin released along with the circulating Games coins and silver coins in 2014, the obverse design celebrates the 100-meter race.

The 2015 gold coin in the series' second release depicts the pole vault, and the third release (also dated 2015) represents wrestling, recalling the ancient Greek origins of the Games. The final gold coin, released in 2016, depicts the Olympic Torch, a symbol of the passion that motivates athletes to achieve their Olympic dreams.

On your mark, get set, collect!

Collecting the Rio Games coins outside of Brazil will likely prove difficult and expensive because of the low mintages and lack of entrenched marketing networks (such as distributors) for Brazilian coins.

The United States Olympic Committee’s stranglehold on licensing Olympic themed anything — even money created by sovereign nations — means that secondary market prices are higher than they would be for collectors outside of the United States.

Distributor GovMint.com, as with recent Olympics, is a distributor for the 2016 Rio Games coins, with the first and second releases of coins currently available at press time July 12.

The precious metal coins are available graded and encapsulated by Numismatic Guaranty Corp. Prices vary depending on the grade.

Whether you’re chasing the gold, silver or bronze (base metal) coins, the 2016 Rio Olympics coins can be collectible reminders of the contest of champions for years to come. 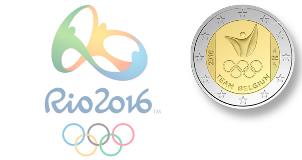 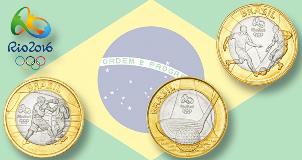