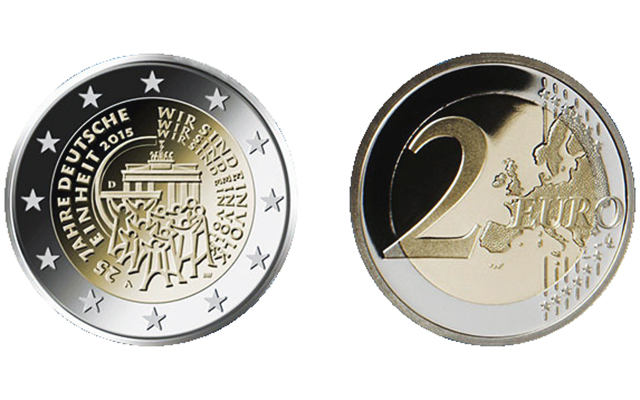 Germany plans to issue a circulating commemorative 2-euro coin in 2015 to celebrate the 25th anniversary of German reunification.

In 2015, Germany will celebrate the 25th anniversary of German unification with a circulating commemorative €2 coin.

The announcment was made June 4 by the Bundesministerium der Finanzen (the German Federal Ministry of Finance). The coin will be issued in January, according to the finance ministry. Since 2006, Germany has launched the €2 coin immediately before or at the World Money Fair in Berlin. The World Money Fair generally occurs in late January or early February.

The obverse, or national, side of the coin was designed by Bernd Wendhut and shows people standing in the foreground at the Brandenburg Gate, the symbol of German unity. The scene embodies a new beginning and fresh start.

The common, reverse, side of the coin carries the standard design, of the face value and a map of the eurozone.

The edge includes the inscription translating to “Unity and law and freedom,” as well as a stylized federal eagle in incuse embossing, unchanged from earlier €2 coins.

The mintage limit is expected to be 30 million pieces, and the coin will be legal tender throughout the eurozone, which currently consists of 18 countries.

Each eurozone member is allowed to issue as many as two circulating commemorative €2 coins annually, but not every nation issues the full amount, or any at all. Joint programs, like the most recent one in 2012 marking the 10th anniversary of the euro in circulation, do not count toward that cap.