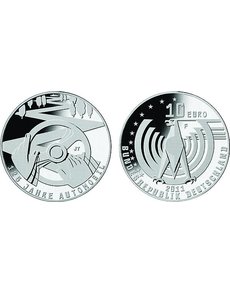 The rapid rise in the price of silver over the past few months has forced Germany to stop issuing Uncirculated silver €10 commemorative coins for circulation.

Germany’s Federal Ministry of Finance announced April 13 that circulating versions the €10 collector coins will now be composed of copper-nickel.

Proof silver versions will continue to be struck for collectors, but offered at a minimum price of €15, according to a translation of the announcement at the ministry’s website. It appears that the price could be adjusted higher if the value of silver were to rise.

The first issue to be affected is the 125 Years of the Automobile coin, originally due for release May 5. The release date of the Proof silver coin has been pushed to June 9 because of the announcement. The copper-nickel version of the Automobile coin is delayed, and will be issued at a later date, because of the switch, according to a translation of the announcement.

Germany’s collector coin program generally honors five subjects, with each of five mints striking and issuing one of the coins.

This year, however, a coin marking the Women’s Football (Soccer) World Cup, to be staged in Germany, will be struck by all five mints.

Uncirculated examples of each €10 coin of each of the year’s themes are released for circulation through banks and post offices, with Proof versions available to collectors through the Mints.

Commemorative coins released into circulation are generally snapped up by collectors and do not generally circulate.

The decision to change the composition of the Uncirculated commemorative coins is the second change to Germany’s collector coins in six months. On Oct. 20, the ministry announced that the size and weight of the silver €10 coins would be changed beginning with the 2011 coins, also due to rising silver prices.

The fineness of the silver coins was dropped from .925 fine to .625 fine, and the weight lowered from 18 grams to 16 grams. The diameter was unchanged, at 32.5 millimeters.

The €10 coin honoring the bicentennial of composer Franz Liszt’s birth released Feb. 3 was the first to reflect these changes.

According to the April 13 announcement, the remainder of the release plan continues on schedule.

The Women’s World Cup coins are due June 9. A coin honoring the folk legend Till Eulenspiegel is scheduled for release July 14. The 150th anniversary of the discovery of the archaeopteryx fossil is the theme for a coin due Aug. 11, and a coin celebrating the centennial of the Elbe Tunnel in Hamburg is planned for release Sept. 15.

A gold €20 coin honoring the beech tree is scheduled for June 23, and a gold €100 coin celebrating the UNESCO World Heritage Site Wartburg Castle is on track for an Oct. 4 release. ¦