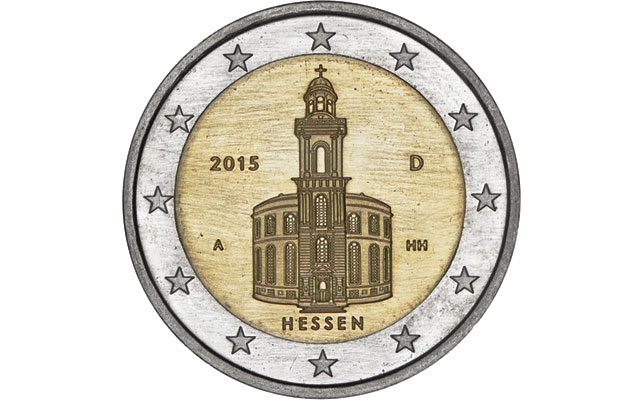 Germany’s annual circulating commemorative €2 coin from a series honoring each state in the federal republic was released Jan. 30, the opening day of the World Money Fair in Berlin

The 2016 coin honors the state of Hesse.

All five of Germany’s mints issued the 2015 circulating commemorative €2 coin. The coin is part of the Bundeslander series (which made its debut in 2006) honoring each of the 16 states of the Federal Republic of Germany.

One state is honored annually, coinciding with a state’s presidency of the Bundesrat (a legislative body), and the coin is launched at the World Money Fair. The five versions are differentiated by the Mint marks A (Berlin), D (Munich), F (Stuttgart), G (Karlsruhe), and J (Hamburg).

The 2015 coin shows St. Elizabeth’s Church in a design by Heinz Hoyer.

The coin has a mintage of 30 million pieces, with six million coins issued per mint.

Various collector versions were also released, individually and in sets.