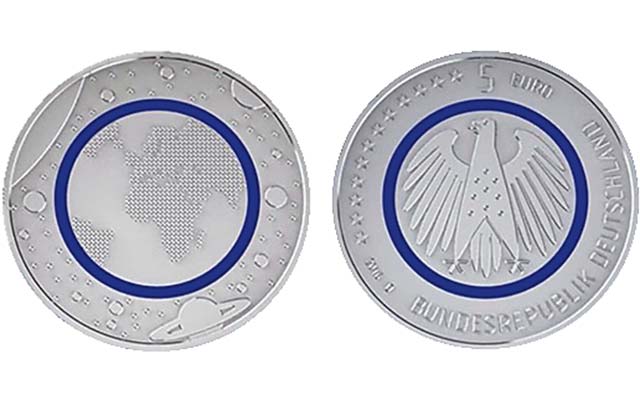 Germany has announced plans to stretch the concept of commemorative coinage by issuing a metal coin with a colorful plastic ring insert in 2016.

Collectors are familiar with polymer bank notes, but collector coins using polymer technology are new to the market.

Germany’s Federal Ministry of Finance on April 29 announced plans to issue a ringed-bimetallic €5 coin with a twist — a plastic or polymer insert between the center of the coin and the ring surrounding it.

The polymer ring will be colored blue on what is apparently the first such coin of its kind in the world. The coin will celebrate Planet Earth and is set to be released in the first half of 2016, according to a translation of the announcement.

The advance in technology should serve to increase interest in modern coin collecting, the announcement said, while enriching the hobby for current collectors. Though other countries have issued €5 coins, the 2016 Planet Earth coin marks the debut of the denomination for German euro coinage.

The abstract design was created by artist Stefan Klein.

At the center of the coin is a partial map of the Earth, which is surrounded by the blue ring suggesting the Earth’s atmosphere. The blue polymer ring also connects the Earth design to the design in the surrounding metal ring, which shows celestial bodies and astronomical objects.

The common national eagle obverse design is based on a design by Alina Hoyer. It shows an eagle, the inscription translating to “Federal Republic of Germany, the denomination, the year 2016, the 12 stars of Europe and the Mint mark of the mint of origin of each coin. Each of the five German mints will strike a version with their own mark.

According to the translation, the coin will be struck in Brilliant Uncirculated and Proof versions, each weighing 9 grams.

The edge inscription will translate to “Blue Planet Earth.”

No mintage figure, weight or alloy was announced.

Coin World will report on this issue as more information becomes available.