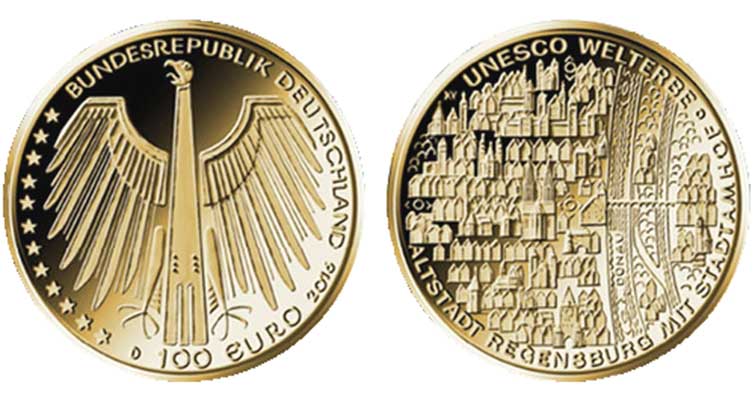 Image courtesy of the German Federal Ministry of Finance.

The medieval-era Danube River town of Regensburg with Stadtamhof is the theme for Germany’s 2016 .9999 fine gold €100 coin.

The site in Bavaria will be the 13th UNESCO World Heritage Site Germany honors in this gold coin series since beginning the program in 2003.

The site was added to the UNESCO list in 2006 for its many monuments and old buildings and a history dating back to at least the third century A.D.

“A notable number of historic structures span some two millennia and include ancient Roman, Romanesque and Gothic buildings. Regensburg’s 11th- to 13th-century architecture — including the market, city hall and cathedral — still defines the character of the town marked by tall buildings, dark and narrow lanes, and strong fortifications,” according to the UNESCO World Heritage Site website listing.

The coin will be struck at each of Germany’s five mints: Berlin (A); Munich (D); Stuttgart (F); Karlsruhe (G) and Hamburg (J), and feature the respective Mint mark.

The obverse of the coin shows the federal eagle emblem, the denomination, year date, 12 stars of Europe and appropriate Mint mark.

Diedorf artist Friedrich Brenner designed the reverse, which features a birds-eye view of the river cutting through the village where some of the historic buildings reside. The representation combines the 2000-year history of Regensburg with the modernity of the present, according to a translation of the German Federal Ministry of Finance announcement about the coin.

The Uncirculated €100 gold coin will weigh 15.5 grams and measure 28 millimeters in diameter.

The mintage (as yet unannounced) will be evenly distributed between each of the five mints.

The coin is due for release in October 2016.

These sites were honored by earlier €100 gold coin in this series:

• Roman monuments, Cathedral and Church of our Lady in Trier (2009)

No coin for this series was issued in 2005 because a gold coin was issued for the 2006 FIFA World Cup. A 14th coin in the series, the second for 2015, will appear later this year:

Interested in other German coins? Check out these Coin World stories!