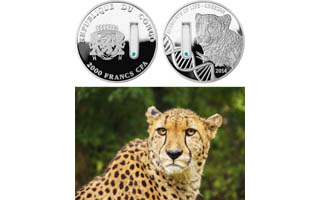 Collectors who want to take a little bit of the zoo home with them should consider the silver 2,000-franc coin from the Democratic Republic of Congo. DNA from Abay the cheetah is colorized, encapsulated and included on the coin.

A new world coin takes the concept of animal ownership to a whole new level.

In early 2014, the German firm Numiscom released a 2,000-franc coin for the Democratic Republic of Congo that includes actual DNA of a cheetah.

The coin is the world’s first to embed DNA, and the animal itself was not harmed, according to Nina Kaminski, product manager with Numiscom.

Kaminski arranged with a zoo in Brunswick, Germany, to collect saliva from a cheetah named Abay. The saliva was then unraveled at a laboratory in Germany where it was colored and encapsulated in tiny vials that are glued onto the coin after it is struck. Color was added because otherwise DNA is “a little bit foggy,” Kaminski said.

It took several days to collect enough saliva to extract the DNA used for the 999 coins.

Kaminski was allowed to enter the pen containing Abay and meet the cheetah closer than she ever imagined.

“[The keeper] told me to come on in. He had real thick fur. I scratched him below the ears and he began to purr loudly. It’s a big cat — you could feel the muscles — and he let me touch his belly.”

It required about seven months and 46 prospective designs to develop and produce the coin, Kaminski said.

Numiscom also engaged the Cheetah Conservation Fund in Namibia during the project, which will receive some monies to further efforts to protect the endangered animal.

The Proof 2-ounce .999 fine silver coin is the first in the Elements of Life series, which will include two coins per year, all featuring endangered animals. The program is dependent on cooperation from the Brunswick Zoo and other sources, but the success of the first issue has paved the way for the rest of the program, Kaminski said.

In working on the project, Kaminski found folks who have blue whale and woolly mammoth DNA in their freezers, but she makes no promise about what may be featured in the series next, other than to confirm that it is a program with legs.