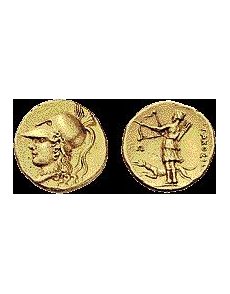 A gold diobol (20 silver litrai) from Syracuse in ancient Greece is one of the highlights in Numismatik Lanz’s Dec. 12 auction. The coin depicts Athena and Artemis, two goddesses.

More than 900 lots of ancient Greek, Roman and Byzantine coins are offered in Munich-based auction firm Numismatik Lanz’s auction No. 153 of “Numismatic Rarities.”

One of the auction highlights is the circa 214 to 212 B.C. gold diobol (20 silver litrai) from Syracuse, made during the fifth republic. The coin shows Athena and Artemis, two goddesses of the Greek pantheon.

More than three-fourths of the catalog is devoted to ancient coins, from the early electrum from the sixth century. B.C. until the end of the Byzantine Empire, with every collecting field represented.

The broad offer of Greek coins has large sections of coins of north Italy and Sicily. The Roman and Byzantine Empires are represented by coins of many emperors, including some pieces that are sought-after rarities. Rounding out the auction are some 200 coins from the European Middle Ages and modern times, an offering that includes Russian coin rarities issued before the Russian Empire.

Catalogs are available for viewing through the firm’s website, www.lanz.com, or at www.sixbid.com. For more information, telephone the firm at (011) 49 89 29 90 70 or email it at info@lanz.com.