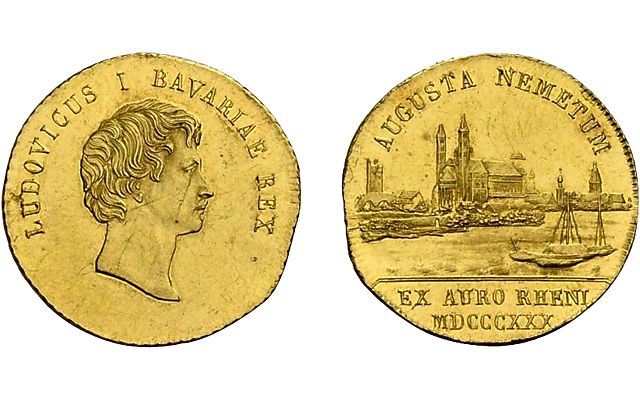 An 1830 gold ducat of Munich, struck from gold panned out of the Rhine River, was offered in Sincona AG’s May 22 auction, where it realized 6,325 Swiss francs (about $7,085 U.S.), including the 15 percent buyer’s fee. The coin is graded Extremely Fine to Good EF, according to the auction house. 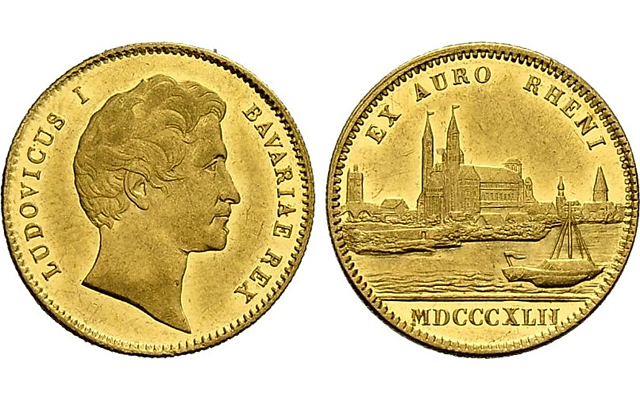 An 1842 gold ducat from Munich realized 2,990 Swiss francs (about $3,349 U.S.) in Sincona’s auction May 22. Graded Extremely Fine by the auction house, the coin is part of a small series issued from alluvial gold from rivers cutting through Germany.

The concept of striking coins from locally gathered metals— familiar to collectors of United States pioneer gold coins— is not unique to the United States.

German coinage includes many examples of “locally sourced” metal being used to make coins, including two gold ducats from Munich that recently sold in Sincona AG’s auction No. 18, on May 22.

These so-called “river gold” pieces were minted from alluvial gold in placer deposits in German rivers.

Gold panning or “washing” was a relatively lucrative business in 19th century Germany, with 83 kilograms recovered in the Grand Duchy of Baden alone, according to Lutz Neumann, an advisor to Sincona.

The gold was minted into ducats that bore the name of the rivers from which the gold came.

This practice was an extension of the tradition of naming the source of the precious metal used to mint a coin or medal, whether the coin made reference to a general mining area such as the Harz Mountains or very specific mines located in different German mining districts, according to the auction house.

Three main sources of the river gold aer identified: the Rhine, the Danube and tributaries, and the Eder in North Hessen, according to Neumann.

The gold found on the banks of the Rhine originated in the Swiss Alps, and gold can still be panned in the Rhine today.

The first German coin that bears an inscription denoting its gold origin is a half ducat from the Electors of the Palatinate minted in Heidelberg.

On the reverse, under the coat of arms is EX A RH, indicating “Ex Aureum Rheni,” which means “From Gold of the Rhine.”

Another source of river gold was the Danube and its tributaries, the Isar and the Inn. The gold found here also originated in the Alps and has been harvested since medieval times.

A very limited amount of gold was recovered from the Eder River in North Hessen.

This gold originated from the Eisenberg (Iron Mountain) near Korbach in the Prinipality of Waldeck. The coins were minted by the Landgraves (later Electors) of Hesse-Kassel.

The practice of striking gold ducat coins from alluvial gold continued from 1674 until 1863, with different cities striking coins at various times and quantities, with the river not always identified as the source on earlier coins.

The first ducats carrying the name of a river were minted in 1756 in Munich, from gold harvested in the Danube River. All these coins have various dies, combinations and variants, Neumann said.

In addition, several medals were made from river gold, as well as from silver recovered as a by-product of the refining of the river gold.

According to Neumann, an “exhaustive, excellent” monograph on the subject is Erläuterter Katalog der deutschen Flussgold-Gepräge (the "Illustrated Catalog of German River Gold") by Franz Kirchheimer, which is available for loan from the American Numismatic Association library.

Both ducats in the recent auction were struck for Bavaria, which had just taken over the city of Speyer in 1816. Two slightly different skyline views of Speyer along the River Rhine appear on the reverse of the coins, the Speyer Cathedral at the center of the scenes. Both coins carry the date of issue in Roman numerals and a Latin reference to the origin of the gold, EX AURO RHENI on the reverse.

The 1830 ducat, cataloged as Friedberg 275, shows a young head of Bavarian King Ludwig I on the obverse. The 1842 ducat shows the older head of Ludwig I.

Though perhaps little known, the coins are interesting artifacts of gold panning along the Rhine in 19th century Europe.