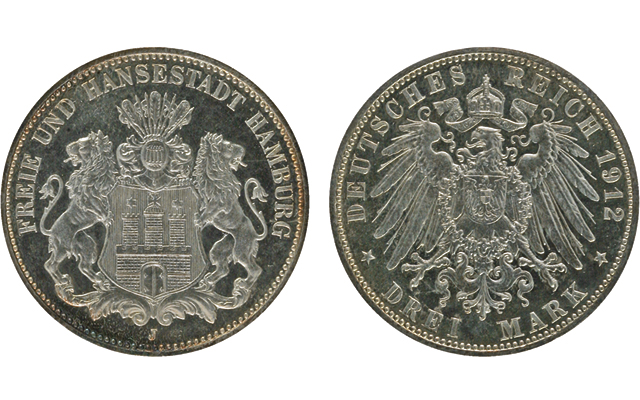 A Proof example of the 1912-J silver 3-mark coin from Hamburg, of the type referenced by the reader.

Enclosed is a photocopy of a German coin. Is the coin worth money?

We found it close to a rice field in 1950. During World War II, German prisoners were sent to help our rice farmers while our boys were fighting. This coin might have belonged to a German P.O.W.

Several POW camps were scattered throughout Louisiana; at least two were within 30 miles from the reader’s hometown.

The coin can be identified as a 1912-J silver 3-mark coin from Hamburg. Hamburg has a history of striking coins dating back to the late 13th century and, as one of the states of the German Empire, issued its own coins up to World War I.

German states struck coins of 2-mark denominations and higher, in silver and gold, while the empire issued smaller denominations in base metals and silver.

The Standard Catalog of World Coins, 1901 to 2000, 40th edition, by Chester Krause and Clifford Mishler, values the coin anywhere from $15 (Fine) to $135 (Brilliant Uncirculated). Collectors should consult with a dealer or third-party grading service to determine condition and value.

In 1976, the Bicentennial year, the states issued silver medals to celebrate the nation’s 200th birthday. At that time there were ads in Coin World where the medals could be ordered.

Did all 50 states issue a medal? Is any information available about these medals and cost? I realize most were struck at private mints but I’ve noticed that the Colorado medal was struck at the Denver Mint and Nevada’s was struck at the old Carson City Mint.

According to the 1977 Coin World Almanac, 48 states and the U.S. Virgin Islands issued official American Bicentennial medals (Mississippi and Wisconsin were the holdouts). Numerous towns and counties also issued medals commemorating the event, and thousands of such objects exist.

Of the 48 medal-issuing states, 45 issued at least one silver medal as part of their programs, according to the Almanac.

Colorado’s medal program was the result of congressional legislation, and those medals marked the statehood centennial.