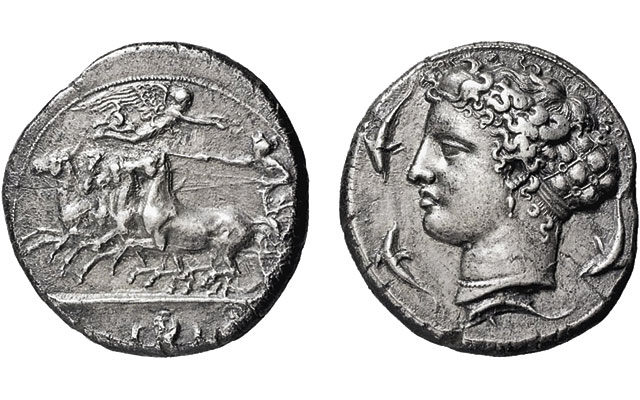 With an auction Sept. 24, the German auction firm Gerhard Hirsch Nachfolger recently reached a milestone. That sale was the firm’s 300th since 1953.

In 1878, Otto Helbig, the great-great-uncle of Francisca Bernheimer, the owner of the present business, founded a company that was an ancestor of today’s Gerhard Hirsch Nachfolger.

Sale No. 300 was one of five different auctions in Munich, from Sept. 23 to 27. A highlight from Sale No. 300 included a famous ancient Greek coin signed by one of the greatest of early coin designers.

The silver decadrachm of Syracuse in Sicily that are signed by the famous die maker (celator) Kimon are legendary. The circa 405 to 400 B.C. coins’ obverse features a victorious charioteer driving a quadriga (four-horse chariot), with Nike floating above, reaching out to crown the driver, while on the reverse the water nymph Arethusa faces the viewers’ left, surrounded by four dolphins.

The Kimon Syracusan decadrachm in the auction, graded “About Extremely Fine” according to the auction house, realized a hammer price of €15,000 ($19,291 in U.S. funds). The buyer’s fee ranges from 17 percent to 23 percent, with a 2.5 percent fee for Internet bids.