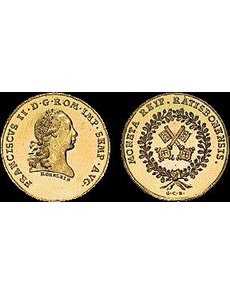 Auction 279 features a collection of ancient Roman coins, which was begun in the 1870s by the unnamed Berlin surgeon and personal physician of Prince Karl von Preussen, brother of Kaiser Wilhelm I. In this function the physician accompanied the prince on several trips including some to Italy, where his interest and love for the ancient world and for numismatics was awakened.

The coins remained in the physician’s family after his death in 1895, and many of the gold coins were melted during World War I. The original owner’s grandson did not add to the collection, passing the remaining portion in the 1960s to his daughter, who with her husband began adding to the collection.

The firm offered its first auction of items from the collection, featuring Greek issues, in September.

The portion of the collection offered in February provides an overview of Roman coinage from the early Republic to the early Byzantine Empire, with a special focus on acquiring, if possible, at least one coin of each emperor in gold, silver and bronze.

A collection of Hessian coins is highlighted by an undated gold 10-ducat coin of Regensburg, Germany, struck for an April 11, 1793, tribute to the emperor Franz II. The coin was designed by Johann Nikolaus Koernlein. It is one of just two coins from Regensburg for Franz II.

The number of examples minted and extant is unknown, but the piece is cataloged as Friedberg 2570 in Gold Coins of the World by Arthur L. and Ira S. Friedberg, which notes that it is “very rare.”

For more information about the auction, telephone the auction house at (011) 49 8929 2150, email it at coinhirsch@t-online.de or visit its website, www.coinhirsch.de. ¦