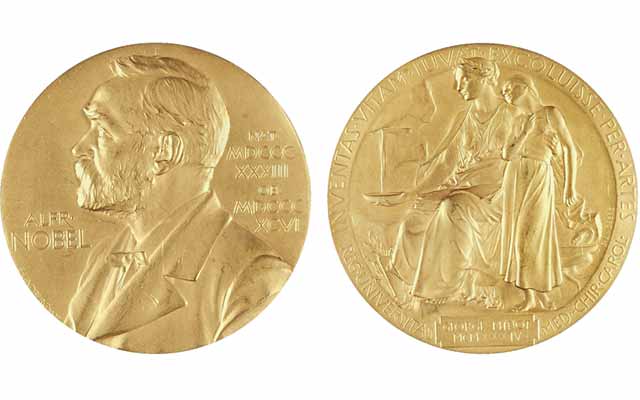 The 1934 Nobel Prize medal for Physiology and Medicine awarded to George Minot will be offered at auction Sept. 21 by Bonhams. Minot was one of three researchers recognized with a Nobel prize for their pioneering work to treat pernicious anemia.

Three other Nobel prize medals have been auctioned since March 2014: the Simon Smith Kuznets medal from 1971; the Carlos Saavedra Lamas medal from 1936; and the Dr. James D. Watson medal from 1962.

The following news release from Bonhams details the upcoming auction of another, the 1934 Nobel Prize Gold Medal for Physiology or Medicine awarded to George R. Minot:

The Nobel Prize medal awarded to George R. Minot in 1934 for his pioneering work on the treatment of pernicious anaemia is to be sold at Bonhams History of Science and Technology Sale in New York on September 21.  It is estimated at $200,000-300,000.

Minot (1885 to 1950) and his fellow scientists William. P. Murphy and George. H. Whipple won the Nobel Prize in Physiology and Medicine for their work in the study of anaemia.  Minot and Whipple discovered that pernicious anaemia could be treated effectively with liver, which is rich in vitamin B12.  Further work confirmed B12 as a vital compound in the development of the treatment.

Minot came from a medical family. His father was a physician and one of his great-grandfathers, James Jackson, co-founded Massachusetts General Hospital. His home in Brookline, Mass., is designated a National Historic Landmark.

Bonhams director of the History of Science Department, Cassandra Hatton, said: “Nobel Prize awards represent the summit of human endeavour and it always creates great excitement among collectors when a medal comes up for sale. George Minot’s work has saved and improved countless lives over many decades. It is interesting to note that Minot himself suffered from diabetes and had it not been for the discovery of insulin by earlier Nobel Prize winners in the 1920s he would almost certainly not have lived to make his own important contribution to the lives of others.”

The medal is being offered with the Nobel Diploma and other related materials.