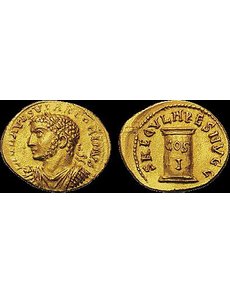 A rare gold aureus of Roman emperor Uranius Antoninus, commemorating a major milestone in Roman civic life, is one of the highlights of Gemini Numismatic Auctions’ Jan. 8 auction.

“All aurei of Uranius Antoninus are extremely rare” and the example in the auction is “apparently the fourth recorded specimen of one of the more interesting types,” according to the auction partners. Struck circa A.D. 253 to 254, the coin commemorates the games held by Philip I in honor of the millennium of Rome.

The auction, the Gemini group’s ninth, is being held in conjunction with the New York International Numismatic Convention. It offers Greek, Roman, Byzantine, Jewish and English coins. Consignments include the Harry N. Sneh Collection and the Phillip Davis Collection of Roman Republican Imitations.

Harlan J. Berk Ltd. and B&H Kreindler are parties in the joint venture.

All successful bids are subject to an 18 percent buyer’s fee, with a discount to 15 percent for certain payment methods.

Greece, Sicily, Syracuse, circa 400 to 370 B.C. silver decadrachm, 43.3 grams, one of “five examples from this pair of dies,” “one of the most complete and sharply struck Syracuson decadrachms we have ever handled,” Lot 5, choice Extremely Fine.

Greece, Corinth, Corinthia, circa 550 to 540 B.C. silver stater, 8.24 grams, Lot 95, “the third known and the second in private hands” for the type, though the coin has an “apparently unrecorded reverse incuse punch,” EF.

Roman Empire, Augustus, circa A.D. 6 to 7 gold quinarius, 3.91 grams, Lugdunum, Lot 251, “two tiny scrapes ... this is no doubt the finest example of a gold quinarius of Augustus in existence,” Mint State.