FUN show is an international affair 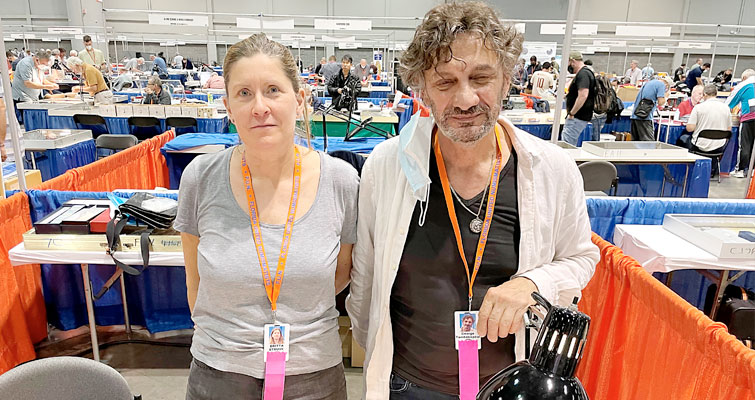 Britta Sturve (left) and Georges Tambakopoulos will be at your service at the Tamco Numismatics booth #644. The Stockholm, Sweden company is a regular sight at the annual FUN conventions.

Though current conditions may have made it rather difficult for travelers to make it into the United States for faraway lands, there is still an international presence at the fun show.

Groups from Spain, Panama, Philippines and other nations were seen setting up booths on Wednesday in anticipation of the public arrival the following day.

A familiar sight of international vendors is Stockholm-based Tamco Numismatics. Wholesalers of ancient and world coins, Tamco offered a wide variety of product on tables full of display cases.

“We’ve been in business 41 years now,” said professional numismatist Georges Tambakopoulos. “We come to ANA and FUN and we have done he New York City show in the past.”

Several attractions keep bringing Georges and his wife Britta Sturve to Orlando. This year, the couple attended the Whitman Baltimore Expo and remained in the country. “The weather is nice,” he said. “Tis is a well-run show. We see many of the same people and we stay connected. We do wholesale business, we don’t have a website and don’t sell online.”

In addition to the shows in the U.S. and Sweden, Tamco Numismatics can be found at the big shows held in Germany for a truly global impact. For now, the 2022 FUN show will get the company off on the right foot for the new year.