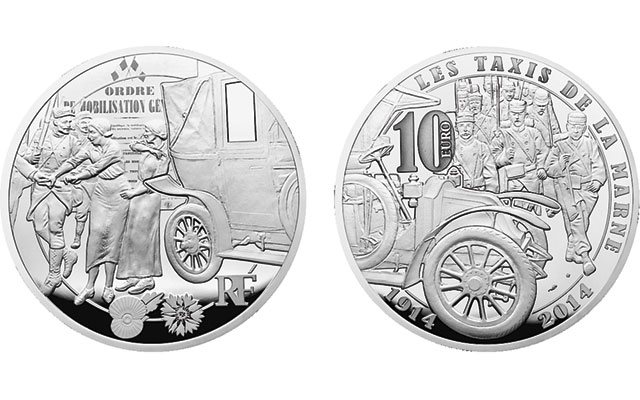 The Monnaie de Paris has issued four new coins, including this Proof silver €10 coin, to commemorate the legendary taxi drivers of the Battle of the Marne. The coins are the first in a series marking the centennial of the Great War, or World War I. 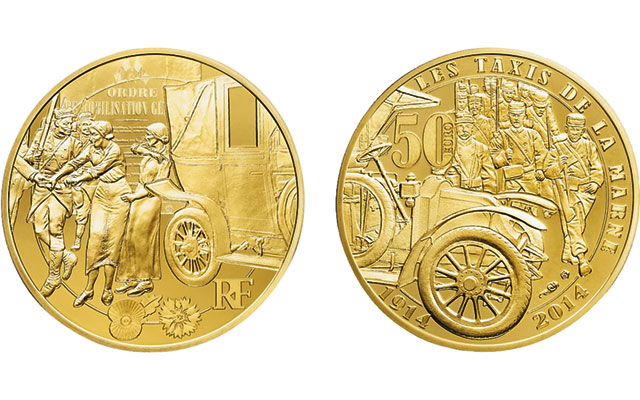 The small gold €50 coin has a mintage limit of 1,914 pieces, a nod to the anniversary date of the Battle of the Marne.

Four new Proof coins from the Monnaie de Paris (the French Mint) commemorate a legend born during World War I.

The coins celebrate the legend of the taxicab drivers whose efforts helped save Paris from destruction by Germany.

As the Germans reached some 30 miles outside of Paris, and engaged French troops in what came to be known as the Battle of the Marne, several hundred taxicabs were enlisted to ferry French fighters to the front, serving as the decisive kindling in the congflagration, according to the legend.

The reality is more tempered. The soldiers that took that trip were important but not instrumental, argues John Hanc, writing at Smithsonian.com, in an article published July 24, 2014.

“But 5,000 men mattered little in a battle involving more than one million combatants. And as it turned out, most of the troops carried by taxi were held in reserve,” wrote Hanc.

The four coins share similar obverse and reverse designs related to the legend.

The obverse shows men setting off for the war front, with a mobilization poster in the background. The back of a taxicab evokes the departure for the Battle of the Marne. A poppy and a cornflower at the bottom of the coins are the respective symbols of the Commonwealth’s and France’s veterans.

The reverse shows the arrival of troops in the Marne, as depicted by the front of the taxicab and marching soldiers.

To order these coins, contact the French Mint or search the secondary market.