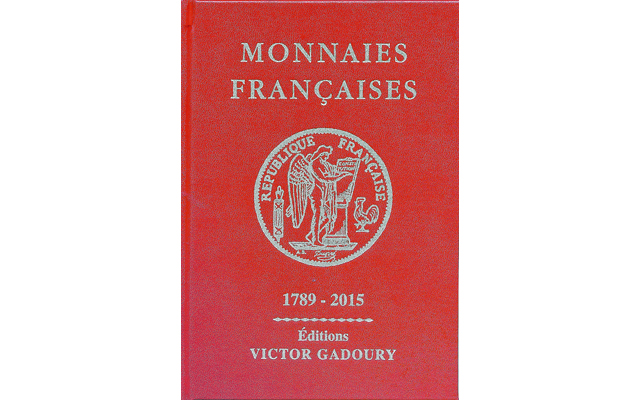 The 22nd edition of Monnaies Françaises, the so-called French “Red Book,” is available from a U.S-based distributor.

American collectors are familiar with the “Red Book,” but a similarly nicknamed book from France covers vastly different material.

Publisher Gadoury has just released the 22nd edition of Monnaies Françaises, a hardcover book exploring French coins from 1789 to 2015. Nicknamed the “Gadoury Rouge," or "Red Gadoury,” the book is far different from A Guidebook of United States Coins, the American “Red Book” published by Whitman.

The 22nd edition of the Red Gadoury was completely revised and significantly enlarged. It contains 560 pages, more than 100 additional pages compared to the 21st edition issued in 2013, but retails for the same price, around $45.

The 22nd edition contains a complete price guide for all French coinages made between 1789 and 2015, covering areas like Monaco, Corsica and the Saarland as well.

The book’s strengths are its clarity and illustrations, and the fact that many specialists contribute information for their particular areas of expertise to present a catalog that is based on state-of-the-art research.

The 22nd edition was completely revised in regard to the following subjects:

• Coins prior to the introduction of the franc in 1795.

• Newly added: Coinages of Napoleon in Italy, with a great number of hitherto unedited variants.

• French euro gold and silver commemorative coins struck between 2001 and 2015, including all mintages.

• Coins from Monaco: introduction of a completely new typology of the sol de billon of Antonio I.

The new edition also includes more than 500 additional photos with many close-up details and an entirely new numbering for French commemorative coins after 1989.

All coins of Monaco have an  entirely new numbering system as well.