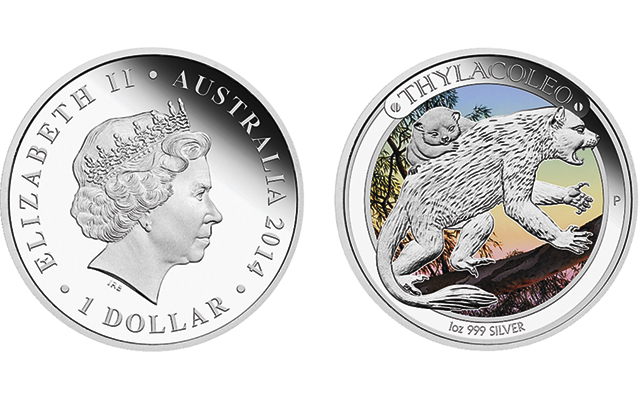 The thylacoleo was the largest marsupial carnivore of its time, having strong jaws and very strong forelimbs. The species' sharp claws were well suited to securing prey and climbing trees. The first digits (thumbs) on each paw were semi-opposable and bore an enlarged claw. Thylacoleo also had massive shearing teeth, a unique trait among marsupials.

The earliest published reference to the thylacoleo was in 1838, according to the Perth Mint. Numerous fossil discoveries indicate that the marsupial lion was distributed across much of the Australian continent, and therefore would have co-existed with other megafauna.

The new coin follows the earlier release of coins honoring the genyornis (a carnivorous flightless bird); the diprotodon (a hippopotamus-sized wombat) and the procoptodon, a short-faced kangaroo.

When the first humans arrived on the Australian continent, giants roamed the land. Today, all of these huge creatures, known as megafauna, are extinct. Each animal is honored on the reverse of a Proof silver dollar with a colorful backdrop portraying the animal's native habitat.

Renowned artist Peter Trusler, a so-called “paleo artist,” created these designs, according to the Perth Mint. Trusler graduated from Monash University, Melbourne, after studing zoological science. He holds a special interest in biological illustration and is a founding member of the Wildlife Art Society of Australasia. Trusler’s work has been published around the world, in print media, books, medical and scientific journals, posters and stamps.

The final coin in the series, to honor the megalania, a venomous lizard, is due for release in July.

All of the Megafauna coins are 1-ounce .999 fine silver dollars measuring 40.6 millimeters in diameter. They have a mintage limit of 6,500 per design and retail for $99 Australian in Australia and $90 AUD outside of Australia.

Distributor Talisman Coins offers any of the four Megafauna coins to customers in North America for the same price, $79.95 each.

Quantity discounts are available for each coin, but the discounts apply only to multiple purchases of the same design.

To order the Megafauna coins from Talisman, visit a special page at its website, or telephone the firm at 888-552-2646.

To order from the Perth Mint, visit its website.