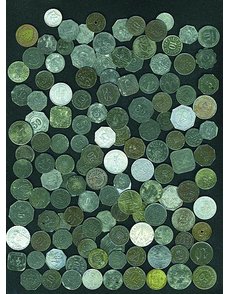 “Notgeld” (German for “emergency money”) was produced to remedy a money shortage during World War I and for some years thereafter. Values for the pieces today depend upon their rarity and condition, just like U.S. coins.

I have four German coins minted by cities in wartime, all dated 1917. I cannot send pictures, but will tell you what is on them:

How can I get some idea of their value?

Though Coin World does not authenticate numismatic items, the descriptions Mr. Watkins provides leads “Readers Ask” to believe he may have four German “notgeld” coins. The legends, dates and denominations are all consistent with these pieces.

Coin number 1 is likely a 5-pfenning piece from the city of Arzberg in Bavaria and is either composed of zinc or iron.

Coin number 2 is either a zinc or iron 10-pfenning piece from the Bavarian city of Cham.

Coin number 3 is probably a zinc 5-pfennig coin from Lauf, also a city in Bavaria.

“Notgeld” is the German term meaning “emergency money” and refers to money produced to fill gaps caused by money shortages during and after World War I. Notgeld can refer to paper money or metallic coins, and some pieces are even made of cardboard, silk or porcelain.

As opposed to the coins and paper money issued by the Imperial German government, notgeld was produced by German states, municipalities, banks, businesses and private individuals.

Notgeld is a specialized niche within the collecting community. Literally thousands of different pieces can be collected. This is an advantage for interested collectors, however, as most notgeld remains very reasonably priced and the collecting challenge never gets old.

A number of helpful guides are available for notgeld, some illustrated and in English, others not. One helpful illustrated guide in English is Catalogue of German War Tokens by Robert A. Lamb.

Using the Lamb book, identifying Mr. Watkins’ pieces is a relatively easy task. The values Lamb provides are from 1974, but the reference is still potentially useful in judging an item’s relative rarity.

Ultimately, just like U.S. coins, rarity and condition are the key factors in determining value. Searching for current retail pricing through print ads, auction and dealer websites or dealer tables at a coin show will be as good a determinant as any in discovering the coins’ current market value.