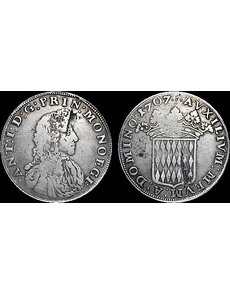 This 1707 silver ecu of Antoine I is one of fewer than 12 total examples known of three variants distinguished by punctuation on the reverse. In Very Fine condition, it has an estimate of ?30,000 (about $40,669 in U.S. funds). 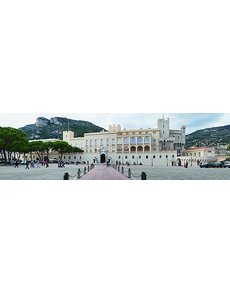 The Palace of Monaco is the official residence for the Prince of Monaco and the rest of the Grimaldi family. Additions during the reign of Louis I taxed the country’s finances.

The connection between a construction project and coinage isn’t immediately clear, but such a story about a coin from Monaco is revealed upon further inspection.

The 1707 silver ecu of Prince Antoine I was struck to help the country “cope with the high costs of consolidation of the fortress of Monaco, to resist the attacks by the Duke of Savoy in conflict with France,” according to Editions Victor Gadoury, the auction firm offering the coin in a Nov. 30 auction in conjunction with the annual coin fair staged by the auction house.

The prince’s palace of Monaco is fortified and is the official residence for the Prince of Monaco. First built in 1215 when the area was under Genoan control, the palace has seen numerous changes and additions, including those instituted during profligate spending by Antoine I’s predecessor, Louis I.

Antoine I is said to have been inspired by the great French palace at Fontainebleau. He added a Baroque arch and double staircase to the Monaco residence.

The costs of renovating the palace were enormous, about 330,000 lire (livres), according to the auction firm, with legend suggesting that the prince had to melt a portion of the royal silverware to provide silver to make coins.

The Princi­pality of Monaco lies between modern-day France and the Mediterranean, not far from France’s border with Italy, with a rocky promontory and natural harbor significant to the protection of the nation.

The Grimaldi family connection to Monaco dates to 1297, when members of the family (who were Genoans) seized the Genovese fortress built on the Rock of Monaco as part of their ongoing conflict with other families of Genoans. Today that fortress, much changed, is the palace of Monaco.

The family lost control of the principality briefly during the French Revolution, but survived the Napoleonic wars and is still in control today.

Today Monaco comprises the cities of Monaco, Monte Carlo and La Condamine. The principality is the second smallest nation in the world.

Monaco’s first coinage began circulating in 1640, with a local mint in operation until 1739 (after an uncertain opening date), producing various coins of base metal, silver and gold, many following the style of the coinage of France.

The portrait of the prince appears on the obverse, with the Grimaldi coat of arms on the reverse.

The silver ecus of Antoine are rare. Researchers have identified three different variants, depending on the punctuation following the date on the reverse: five periods arranged in a cross formation, three points or a point. Fewer than a dozen examples are known, total, for all three variants.

The coin is rare, one of fewer than a dozen known; legend suggests royal silverware was melted and turned into coins.