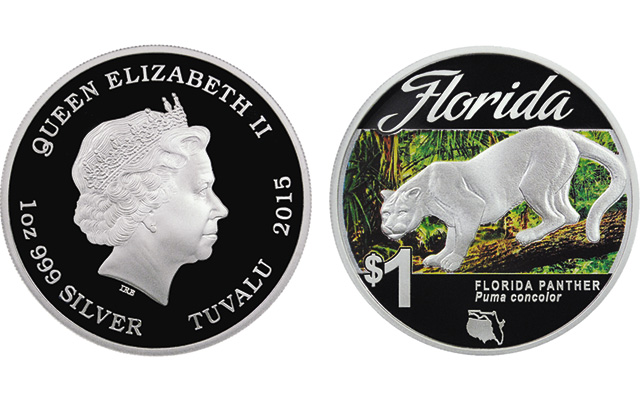 The Florida panther is the subject of a 2015 Proof silver dollar from Tuvalu being released at a coin show in Florida.

The coin, struck in the name of Tuvalu, is debuting during the Florida United Numismatists show in Orlando. The show runs from Jan. 8 to 11.

The reverse of the coin depicts a selectively colorized Florida panther standing on a fallen oak tree with a background containing saw palmetto, a scene typical of South Florida. The Florida United Numismatists logo, a map of Florida overlaid onto a map of the United States, also appears.

The obverse bears the Ian Rank-Broadley effigy of Queen Elizabeth II, the denomination, the 2015 year-date and the coin’s weight and fineness.

The Florida panther (Puma concolor) is recognized as Florida’s official state animal, but is one of the most endangered mammals on Earth. They once flourished in woodlands and swamps around the Southeast, but their habitat is rapidly disappearing.

Panthers historically ranged across the entire Southeastern United States. Today, the breeding population of Florida panthers (between 100 to 180 animals) is found only in the southern tip of Florida.

The coin will be sold at the show, at the booth of Modern Coin Mart, the exclusive distributor of the coin. Chuck Daughtrey, designer of the reverse, will attend the show on Jan. 9 and 10 to meet collectors.

A special price will be available at the show, and any coins remaining after the show will be sold at the official issue price.

Daughtrey told Coin World that the prices had not been confirmed as of Dec. 18.

Examples of the coin in original packaging from the Perth Mint (which struck the coins) will be available, in addition to examples that are encapsulated and graded by Numismatic Guaranty Corp.

For further details about the coin, visit the Modern Coin Mart website.