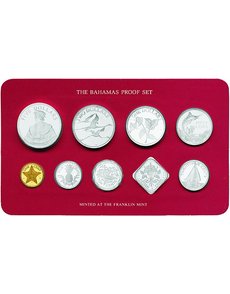 Nine-coin Proof set contains a Christopher Columbus silver $5 coin and copper-nickel $2 coin showing three flamingos in flight. With each coin carrying a flamingo in the crest, this is a 12-flamingo coin set. 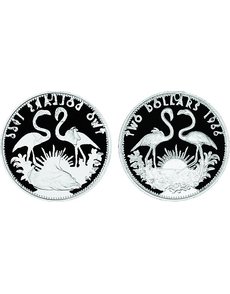 After being cut to make a pendant, this first year of issue 1966 Flamingo $2 coin of the Bahamas weighs .54 troy ounce. The original coin weighed .88 troy ounce. Many of these sterling silver coins were made into pendants. 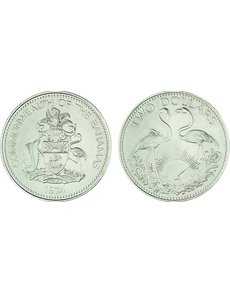 New varieties appeared in 1974 from the Bahamas, including this copper-nickel $2 coin with Matte Finish. 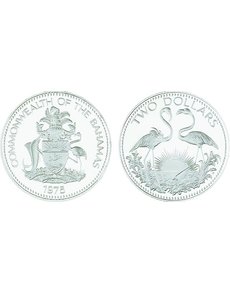 This 1975 $2 coin is the sterling silver (.925 fine) Proof version. The Bahamas has issued the Flamingo design in various coinage forms over the years. 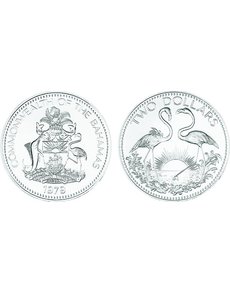 1979 is a key date among the full size variants of the Bahamas Flamingo $2 coin. Only 300 examples of the coin were made, according to records. 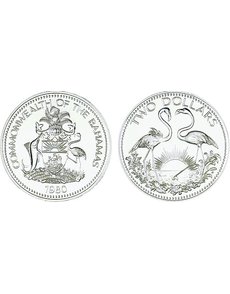 This very rare 1980 key date may be one of fewer than 100 minted. Occasionally, this rarity shows up in a Franklin Mint collection called “Bird Coins of The World.” 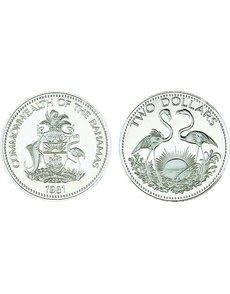 1979 is a key date among the full size variants of the Bahamas Flamingo $2 coin. Only 300 examples of the coin were made, according to records.

A coin design type set builds upon the various forms of a single well-known or beloved design.

Among U.S. coin collectors, for instance, are those who collect coins with any version of Adolph Weinman’s Walking Liberty, from the 1916 Walking Liberty half dollar to the 2011 American Eagle bullion coin.

One coin that lends itself well to this type of collection for world coin enthusiasts is the famous Flamingo $2 coin of the Bahamas. Sunshine, water and flora frame two flamingos standing beak to beak in a scene of unmatched tropical tranquility.

Beginning in the 1960s, this old venerable was struck in different sizes, metals and finishes and with widely varied mintages for three decades. Collecting a complete type set is challenging but not impossible. Eschewing the gold versions keeps a type set more affordable. The prices for the copper-nickel and silver coins range from $10 to $100 each.

The English sculptor Arnold Machin (1911 to 1999) designed the reverses of the first decimal coins of an independent Bahamas, including the Flamingo coin. Machin’s original sketches assigned the design of two birds and a sunrise to a proposed 1965 25-cent coin but the design first appeared in 1966 on a sterling silver $2 coin weighing .88 ounce.

This large silver beauty was an instant hit with collectors, tourists and coin jewelry makers. To this day, it is easy to find cut-coin pendants made from the 1966 coin. The pendants sell at online auction sites like eBay for as little as $20. The $2 coin was next issued in 1969 and 1970, with a Proof version showing up for the first time in 1969.

From 1966 to 1971, all of the coins of the Bahamas were struck at the British Royal Mint in England. After that, some were produced at the private Franklin Mint in Pennsylvania.

1974 was an important year for new variants. The Flamingo silver coin continued in Proof only and a new copper-nickel version appeared with two different finishes: shiny Proof-like Uncirculated and a Matte Finish. It was also the first year that flamingos appeared in the designs on both sides. The obverse of Queen Elizabeth II was replaced that year with the national coat of arms, of which a flamingo is one element. Finally, in 1974, the most expensive Flamingo coin was also minted, a Proof gold $2,500 coin weighing 1 troy pound.

Between 1974 and 1980, annual mintage totals varied wildly from 300 to 37,000 pieces for the copper-nickel coins, and from 2,084 to 129,000 strikes for the Proof silver versions. The Uncirculated 1979 and 1980 coins are key dates with the lowest mintages of the full-size coin. It is estimated that fewer than 100 were made in 1980, but the exact number is a mystery. Sometimes one of these two keys shows up in a 31-piece Franklin Mint Collection called “Bird Coins of the World.” This world coin collection was assembled and sold in large blue binders from 1979 to 1980 to benefit the International Council for Bird Preservation. Buyers coming across such a set should check the date of the card carrying the Bahamas coin. The value of the 1980 key date coin can be worth twice the typical selling price of the whole collection.

In 1981, the first Proof copper-nickel $2 coin was issued, for one year. The reduced-size silver version first appeared in 1989; still made of sterling (.925 fine) silver, its weight was reduced to a half ounce. One decade later, in 1991, the last silver coins of this design were minted, but the design continued in various gold denominations. In 1982, a new bird graced a Proof copper-nickel $2 coin, the Bahamas swallow.

The graceful pink flamingo (whose unique coloration comes from eating plankton) is the national bird of the Bahamas so it was not absent from coin reverses for long. In 1984, flamingos once again came to reside on the Proof copper-nickel $2 coin, but this time, they were birds in flight.

The graceful, brightly colored flamingo is a popular bird. Ancient Egyptians believed them to be the living representation of the god Ra.

For folks who want to expand their collections around this fascinating creature, flamingo coins have also been issued by Cuba, Kazakhstan, Niue, British Virgin Islands, Turks and Caicos, and Russia. And for medal collectors, silver rounds were issued by the Flamingo casino in Las Vegas, and elongated cents were sold at zoos and avian sanctuaries. ¦