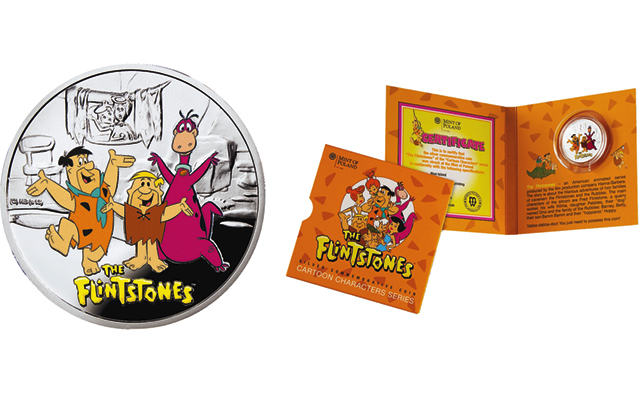 Characters from The Flintstones appear on a new cartoon collector coin from the Mint of Poland.

The Mint of Poland travels to the prehistoric town of Bedrock with its newest cartoon collector coin, honoring The Flintstones.

The Proof .925 fine silver dollar, issued for Niue Island, was released in mid-April and follows coins celebrating the cartoons Tom & Jerry, Scooby Doo and others.

The Flintstones debuted on television in 1960 as an animated sitcom cartoon produced by Hanna-Barbera, and continued until 1966. The characters live on in movies and licensed products, including the new coin.

The Stone Age family of Fred, Wilma and Pebbles Flintstone were neighbors and friends with Barney, Betty and Bamm-Bamm Rubble. All four adults, as well as Dino, the Flintstones’ pet, appear on the reverse of the coin.

The coin weighs 14 grams, measures 32 millimeters in diameter and has a mintage limit of 6,000 pieces.

Collectors in the United States and Canada may purchase the coin from American Precious Metals Exchange or Downies, for varying prices.