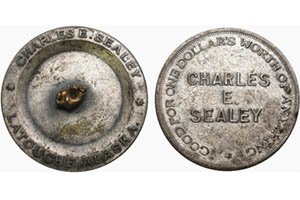 One of five bronze, gold-plated nugget tokens issued by Charles Sealey of Latouche Island in Alaska to be offered at auction March 29 to 30, 2014.

Five bronze, gold-plated nugget tokens issued by Charles Sealey of Latouche Island in Alaska will be offered at auction March 29 to 30, 2014, by Holabird Western Americana Collections in Reno, Nev.

Sealey was a miner and businessman in Alaska. He joined the Klondike Gold Rush in 1897.

The tokens he issued are “considered one of the great western monetary pieces from the Alaska gold rush. Before this find, there may have only been five to 10 known in existence,” according to the auction firm. The tokens were dug and “show the signs you would expect of tokens buried for some time.”

According to the auction firm, these dug tokens were found in the 1940s by a Norwegian prospector. Many of the miners in that part of Alaska were from Norway. Latouche Island is in Prince William Sound, located southwest of Valdez, Alaska. It was the “perfect target for prospectors on the way to the goldfields,” according to the catalog description.

Any remnants of the mining community of Latouche Island are all gone. A magnitude 9.2 earthquake hit Alaska on March 27, 1964, causing massive changes to the landscape. Latouche Island was raised about 9 feet and moved about 60 feet southeast. The community was deemed unsafe and its structures were bulldozed, according to the catalog description. The once-thriving mining town is now considered a ghost town.

One side of the gold-plated nugget tokens (Lot 281) states CHARLES E. SEALEY LATOUCHE ALASKA and has a tiny gold nugget attached. The text on the other side says GOOD FOR ONE DOLLAR’S WORTH OF ANYTHING surrounding CHARLES E. SEALEY in the center of the token.