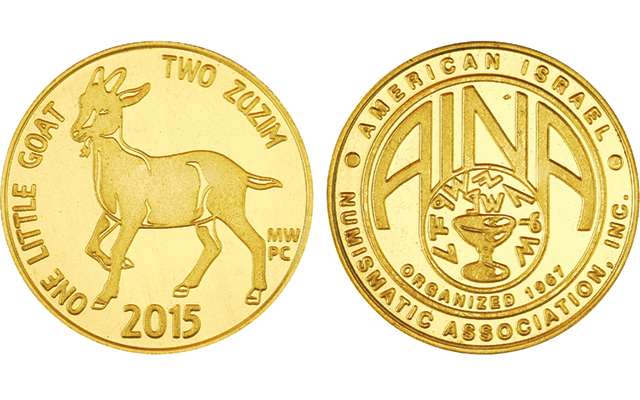 A new brass medal celebrates the connection between the “Little Goat” and Passover, and the Lunar Year of the Goat. A total of 850 examples of the medal were issued.

The most famous goat in Jewish households around the world is featured on a 2015 medal issued by the American Israel Numismatic Association.

This medal is dated in the Lunar-Zodiac “Year of the Goat,” perhaps making it the first Jewish Lunar-Zodiac commemorative, according to AINA president Mel Wacks.

The design has special significance for the Passover holiday, because of the song “Chad Gadya” which is sung at the end of every Passover Seder (meal).

In that song, the singing of which is a tradition dating back some 500 years, Wacks said, the lyrics refer to “One little goat” that was purchased for “two zuzim.”

In addition to picturing the young goat, the legend TWO ZUZIM appears on the medal, referring to the Zuzim coins issued only in the time of the Bar Kochba Revolt (132 to 135 A.D.) when Roman denarii were overstruck with Jewish designs.

The Little Goat/Two Zuzim medal was designed by Wacks, with artwork by Paul Conner. Initials for both Wacks and Conner appear on the obverse. The AINA logo on the reverse was designed by Nat Sobel.

The brass medal measures 30 millimeters in diameter and has a mintage of 850 pieces, all struck by the Highland Mint.

The medal is being issued by the AINA as a membersip incentive — one medal will be sent to every AINA member in good standing in 2015. Membership dues are $25 annually, and membership cost covers the price of the group's publication, The Shekel.

Individual examples of the Little Goat medal are available to collectors for $5 each.