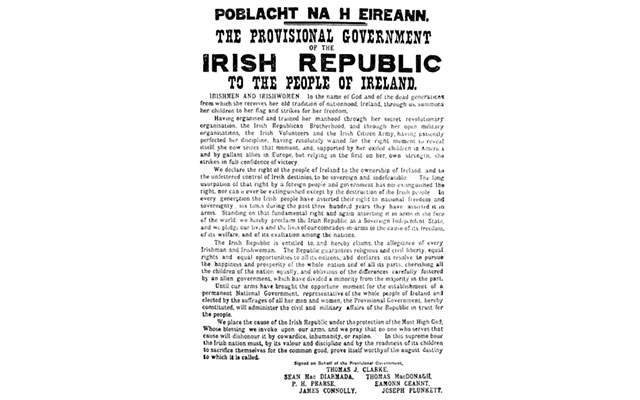 The Proclamation of the Irish Republic was the foundation document for the modern Irish state. The proclamation was issued in conjunction with the Easter Uprising of 1916, and will be celebrated on Irish commemorative coins in 2016.

The first circulating commemorative €2 coin from Ireland is scheduled to be released in 2016.

The coin, the first exclusive commemorative theme for the nation since it adopted the euro in 2002, will mark the Easter Uprising centennial. The uprising was not successful but set the nation on a path toward an independent Ireland. The coin is scheduled to be released in early January 2016.

The announcement was made Jan. 30 by a representative of the Central Bank of Ireland in Berlin during the media forum at the World Money Fair.

The Easter Uprising is “such a subject of national importance that, for the first time since the introduction of the euro in 2002, Ireland will issue a circulating commemorative 2 coin,” according to the announcement from the Central Bank of Ireland.

The theme for the coin will be the Proclamation of the Irish Republic, the founding document of the Irish state, which proclaimed independence and declared the rights of the Irish people.

In addition to the €2 coin, Ireland will mark the Uprising with  two silver coins and one gold coin, with designs and specifications to be determined.

The €2 coin will be offered in several versions, as well as part of the annual Proof set.