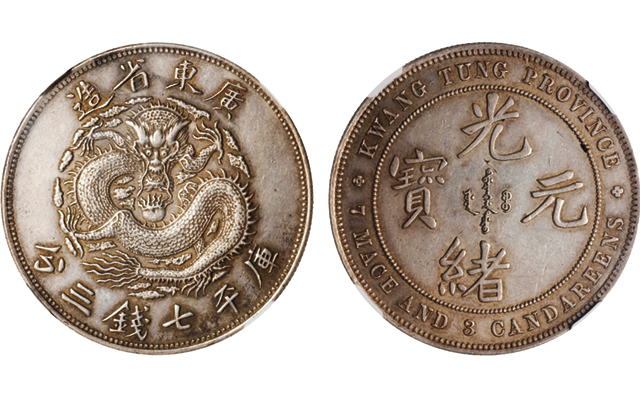 An example of China’s first machine-struck silver dollar, the circa 1889 to 1890 Seven Three Reversed Pattern version of a Dragon dollar, somehow escaped being melted shortly after the coin was issued.

Modernization came to Chinese coins around the same time as it affected the coins of Korea.

In 1887, the Kwantung Mint was authorized. Machinery, dies and other equipment was ordered from the Heaton Mint in Birmingham, England, arriving in China in 1888.

Kwangtung became the first Chinese mint to use modern technology.

The first coinage series included a silver dollar that was also denominated as 7 mace and 3 candareens. The dragon design on these coins became standard across all provinces, not just Kwangtung.

The series from circa 1889 to 1890 are dubbed the Seven Three Reversed Patterns, the “seven three” referencing the silver standard of 7 mace and 3 candareens, and the “reversed” reflecting the order of the English and Chinese legends, which are reversed from what later became standard.

The silver coins contained one candareen (0.01202 troy ounce) of metal greater than the coins they were intended to replace, the Mexican 8-real coin, so when circulation production began, many of the new coins were removed from circulation and melted.