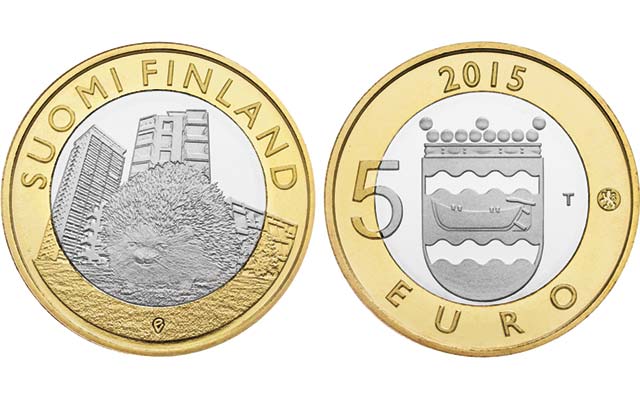 Finland’s newest provincial animal coin allows collectors to get close with a prickly animal without worrying about needing a bandage.

The third coin for Uusimaa, due for release April 20, shows a hedgehog.

The Suomen Rahapaja Oy (Mint of Finland) announced the theme on March 23.

The obverse of the ringed-bimetallic €5 coin (designed by Erkki Vainio) depicts the hedgehog backed by a city scene of high-rise buildings. The reverse, designed by Nora Tapper, bears the coat of arms of the historical province of Uusimaa.

The 2015 coin will be the third €5 coin for Uusimaa, following a 2012 coin in the Buildings of the Provinces series showing Helsinki Cathedral and Uspenski Cathedral, and a 2011 coin that “paid tribute to the factory milieus of early industrialism in Finland,”  according to the Mint of Finland. The earlier coins are also both ringed-bimetallic pieces.

Proof and Brilliant Uncirculated examples of the Hedgehog of Uusimaa coin are being issued. The maximum mintage is 35,000 BU coins and 10,000 Proof coins, and multiple packaging options are available.

The coins weigh 9.8 grams and measure 27.25 millimeters in diameter.

Advance sales of the hedgehog coin begin at the Mint of Finland online shop on April 7.